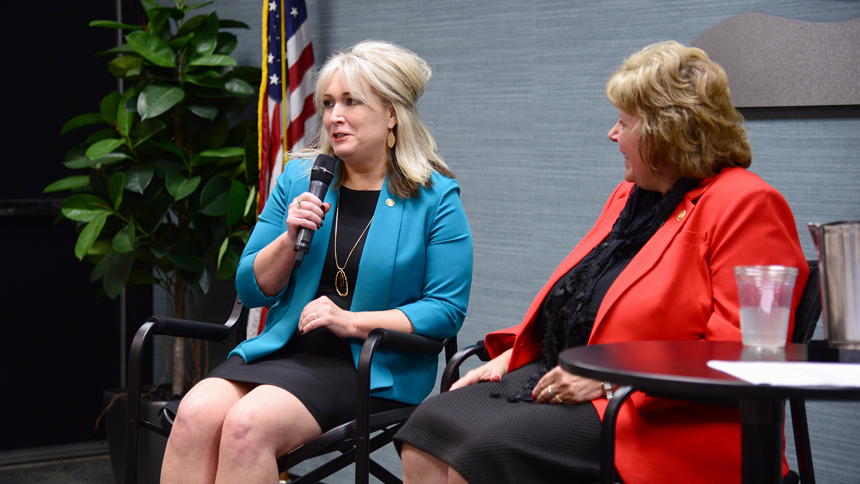 Just a few years ago, if you asked Sandy Crawford about her political ambitions, you might have gotten a quizzical look.

“If you told me 10 or 15 years ago that I’d be here today, I’d have said you’re crazy,” said Crawford, a 30-year veteran of the banking industry from Buffalo, Missouri, who now represents the state’s 28th Senate District after serving nearly seven years in the state House of Representatives.

The same is true for Sonya Anderson, who has represented the 131st House District since being elected in 2012. With more than 20 years of experience in business management, she initially had no intention of seeking office.

But both were highly informed and cared deeply about the topics that affected them – traits that didn’t go unnoticed by colleagues who encouraged them to run, as they told those that gathered at the Chamber on July 12 for the Public Policy Speaker Series.

“As my boys got older, I got more vocal,” Anderson said. “People noticed and thought I should run. And when redistricting happened, I got drawn into a new district and the opportunity presented itself.”

They’ve made the most of their opportunity, and nowhere was it more apparent than during the 2019 legislative session, when they helped lead on some of the Chamber’s top priority issues including workforce development and infrastructure.

“The (Missouri One Start and Fast Track initiatives were) something I believed in,” Anderson said. “Workforce is something I hear from business leaders that we need – people who are skilled and ready to go – and sometimes a four-year degree is not the best approach for everyone. Maybe a technical program is more in their wheelhouse.”

But the process of getting the bills passed was not easy, due in large part to the opposition of the self-appointed Conservative Caucus, who made up just six of the 24 Republicans in the Senate. Crawford, who serves as Senate majority whip, gave much of the credit to Gov. Mike Parson for keeping the focus on his stated workforce priorities.

“I’ll give the governor a lot of credit, and it’s unlike anything I’ve seen,” she said. “There were so many times I saw the governor going in and out of offices meeting with people to see how we could make this happen. There were a lot of heated caucus meetings, and those of us not in the Conservative Caucus did not keep quiet, I’ll leave it at that.”

The two stated other proud accomplishments from their time in the legislature as well, including their work on passage of Right to Farm legislation and reorganization of the state Department of Economic Development.

But one of their biggest accomplishments may be their ability to offer examples of women in leadership in Jefferson City.

“Sometimes I think women are slower to recognize and stand up for their own abilities, and sometimes women with small children are hesitant to leave home,” said Crawford, noting that she is was only the 28th woman to serve in the history of the Missouri Senate. “I wouldn’t have run if someone had not approached me. Look around and see who those women are who should be in those positions, and encourage them.”

Anderson echoed those sentiments. “I’d like to see more women get involved. If you want to get involved, let me know,” she said. “We’re the superminority – but we roar.”