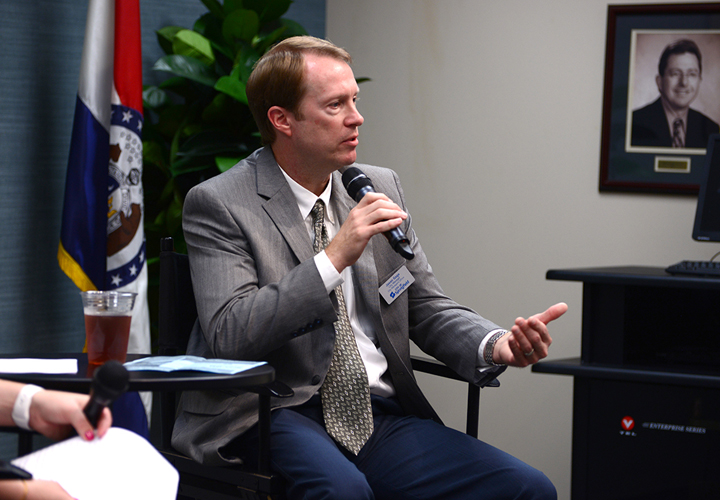 But Gage, who began in his role as the new Springfield City Manager on August 1, is well-equipped to handle the demands of the job. He spent the previous 13 years as city manager of Salina, Kansas, having previously served the same role in Stillwater, Oklahoma and De Soto, Missouri. He also grew up in the area and has degrees from both Missouri Southern State College in Joplin and the University of Missouri in Columbia.

He brought his experience and his outlook to The Network’s CEO Series on August 16 for a Q&A session in front of nearly 100 young professionals.

So what did he have to offer about the future of Springfield and how he hopes to help the city moving forward? Take a look.

What does the City Manager role entail?
Springfield has a council-manager form of government. The city manager essentially becomes the CEO. My role is to, with a few exceptions, supervise all the staff of the city – except the city clerk and the internal auditor. My job is to be separate from politics, but to help craft policy. I need to provide really good, objective information, chase down whatever information councilmembers need, and then enact the policies they choose to the best of my ability.

Describe your management style
I’ve learned that my role is to help people do their jobs to the best of their ability, and step in when I need to. I’m a believer that I don’t know everything. More heads are better than one, so I’m used to engaging a lot of people, of all ages, backgrounds and occupations, and being as grounded as I can. Make sure you understand what people want and find out how their answer fits into the box, and whether you need to step outside of the box if you can.

How do you engage YPs?
Get them involved in the organization, first of all. Learn the faces and their places. Also, typically, YPs don’t get involved as much. If you have friends who aren’t interested in getting involved, encourage them to get involved – it’s our civic responsibility to encourage people to be involved, share their voice and their input and make themselves heard.

What advice would you give yourself as a YP?
Don’t be intimidated by someone who is older or who you think is smarter than you. It doesn’t mean their judgment is better. It’s about how you leverage everyone’s knowledge and expertise to put the right plan together. Someone can say they’ve been doing something for 20 years, but have they been doing it well for 20 years?

What’s your vision for Springfield?
Well, it’s early for me – I’m still gathering information. But this is a neat community. It’s large enough that we have resources and opportunities, but it’s not too big that we get lost in all that and can’t move the whole community forward. Let’s take the best of Springfield and see how fast we can run with it. I hear people say that we’re on the verge of doing really great things, but we already have. Downtown redevelopment has been fantastic, and don’t overlook that. The challenges that Springfield has, they’re long-term. We can’t overlook them, but let’s look at how to solve them rather than focusing on how they weigh us down.

So how do we balance our positives with our issues?
I believe in focusing on the positive. You’ll see the negatives come up in the discussion of policy. But we need to continue to focus on the positives whenever we can. It’s not very often that you have the chance to make a huge change all at once; it’s usually incremental. But if everybody is a part of the positive, you can overcome some of the negative.