A story of personal growth, public involvement and a positive attitude 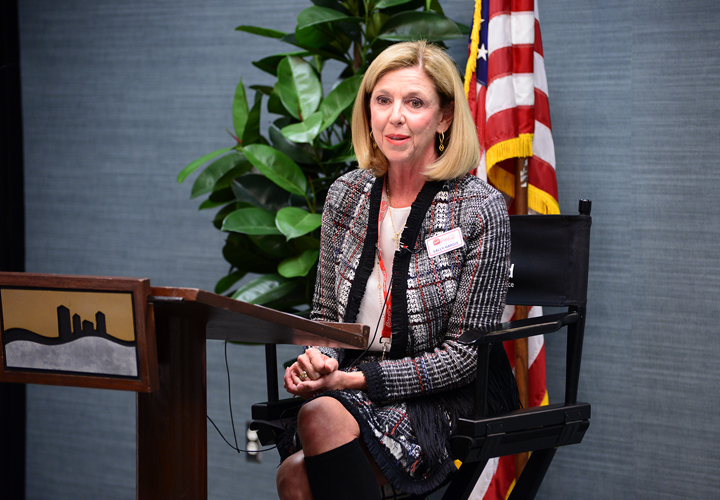 As she reflected on a 25-plus-year career that’s still going strong, Sally Hargis had much to say about why she stays so involved in the community and how she works to keep a fresh, positive outlook.

The chairman and vice president of corporate strategy at Ozarks Coca-Cola/Dr Pepper Bottling Co. was the featured guest at The Network’s final event in the 2017 CEO Series on November 16, and she had plenty of advice to offer to more than 50 young professionals in attendance.

Hargis talked extensively about the history of her family’s company, which was founded in the 1920s and has served as the sole Coca-Cola bottler and distributor in the Springfield area for nine decades, with guidance from her grandfather and her father, current CEO Edwin “Cookie” Rice.

The company has grown rapidly in recent years, adding the Joplin and Kansas City markets in 2015 and northwest Arkansas earlier this year, to grow from 330 employees to 730.

Hargis then turned her focus to her own professional growth. She came of age at a time when women were expected to choose between career and family, but she chose to straddle that line. “I have dual degrees in home economics and journalism,” she said. “You can’t straddle the line much more than that.”

After spending 10 years working in local media, she joined the family business—but she says she is always looking to reinvent herself. One way she does that is to continually seek advice from mentors and to learn new things. “One of the best classes I ever had was a class on negotiation, because in life, every day is a negotiation,” she told the crowd.

Her skills in negotiation have served her well in the public sphere, where she is an avid advocate for business issues and the free enterprise system in general. She says it’s critical to get involved, especially when it comes to issues that affect you or your business.

“I continue to be amazed by the free enterprise system and I think we’re lucky to live in a country that espouses that system,” she said. “But we have to all take personal responsibility for the issues that affect our businesses and our lives. We can’t depend on someone else to do that for us.”

But being socially active doesn’t mean being negative, she added. She implored everyone to encourage others along the way and be positive: “Attack things with an air of optimism – and above all, exhibit courtesy and respect for everyone.”