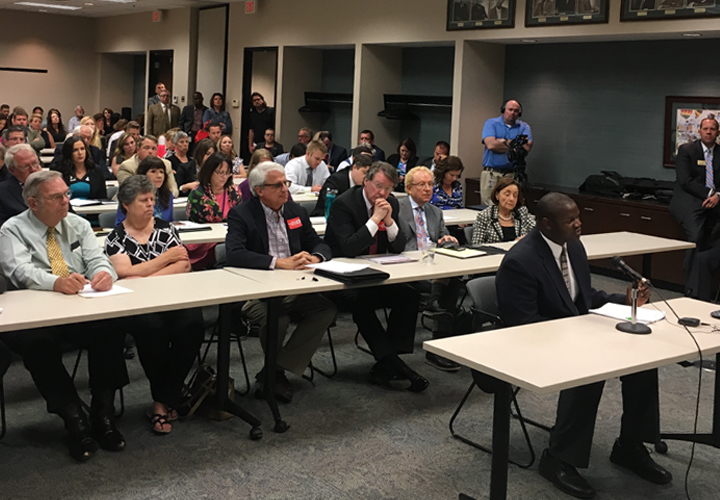 The Chamber’s Public Affairs team is always working to advocate for business interests with local, state and federal legislators. But many members may not be aware of another aspect of the Chamber’s work: regulatory issues.

Regulatory issues, often decided by appointed government bodies, can be more difficult in terms of advocacy because of the lack of a set, traditional process to connect with decision makers. Thankfully, several important regulatory issues were front and center in Springfield in recent weeks, and the Chamber and its members were ready to make the case for priorities that will help to strengthen our economy and our community.

One of the most notable recent examples was the Governor’s Commission for Simple, Fair and Low Taxes, which held a public hearing in Springfield in June at the Chamber’s offices. The commission was formed to consider the effectiveness and return on investment of state-level taxes and credits, and more than 100 members of the public attended the meeting to offer their thoughts and support for various credit programs.

Two speakers at the Springfield meeting were cited by name in the commission’s final report, which was released June 30. Both Springfield Mayor Ken McClure and 3M Springfield Plant Manager Frederick James spoke in support of the Missouri Works program, which the state Department of Economic Development calculate brings in $3.77 for each dollar invested. The report quoted James as saying that “3M’s decision to expand the Springfield facility and add local jobs wouldn’t have happened without Missouri Works incentives.”

The committee recommended increasing the annual cap on the Missouri Works program, and while recommendations for other programs were not as favorable, the public input during the Springfield session was invaluable in helping to advocate for these important programs.

More recently, state issues were on display on July 20 during two forums. One, with the Missouri Department of Labor and Industrial Relations, covered regulatory burdens, while a second event with the recently created Governor’s Innovation Task Force talked about entrepreneurship and what the state can do to promote innovation.

The regulatory burden event was part of an effort among all state agencies following the governor’s Executive Order tasking them with reviewing every regulation under their jurisdiction and soliciting public input, in an effort to determine if they are necessary, cost-effective and not unnecessarily restrictive.

If you missed the July 20 event, fear not; there is still a chance to offer your input. Missouri DOL has set up this website to offer feedback on labor regulations and their effectiveness through August 31.

The second event on July 20 focused on innovation and entrepreneurship and was run by Drew Erdmann, chief operating officer of the governor’s office. The event at The eFactory brought together innovators, entrepreneurs, civic leaders, scholars and community leaders – as well as state leaders, including newly appointed Acting Director of the Missouri Department of Economic Development Rob Dixon – to discuss how the state can encourage new innovation and business growth. Similar events were held in St. Louis, Kansas City, Columbia and Cape Girardeau.

All the information goes to the Governor’s Innovation Task Force, which is developing specific recommendations that could include executive action, legislative or regulatory action, or other use of state resources. Those recommendations will help shape the governor’s economic development priorities, which he plans to present in early September.

All of these issues, while not exclusively decided in a legislative setting, are extremely important to our state and our economy, as well as employers’ bottom line. The Chamber is thankful to our community leaders and members who take time to make their voices heard on these vital topics.

Another important topic for Missouri's future is transportation – and you have a chance to make your voice heard there, as well.

The 21st Century Missouri Transportation System Task Force will hold a public meeting at the Chamber offices on August 23 at 1 p.m. and will be taking public testimony. If you’re interested in the future of the state’s transportation infrastructure and funding, please join us for this event!