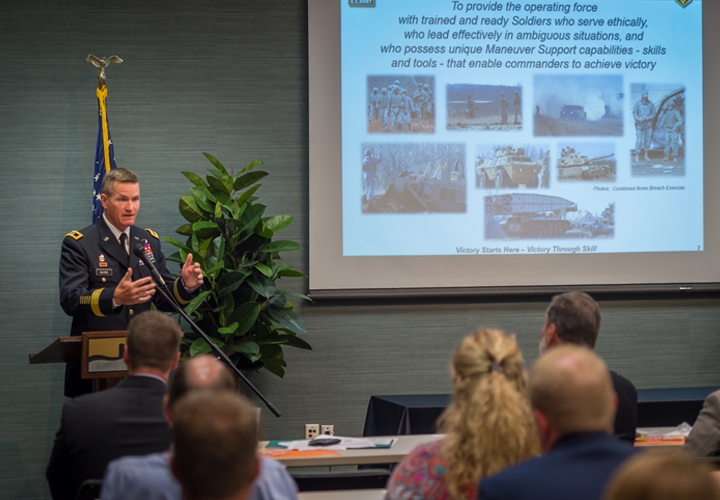 The officer in charge of Fort Leonard Wood made his first visit to the Chamber on June 23 to offer an update on what is happening at Missouri’s largest military base and its impact on Springfield.

Fort Leonard Wood is a statewide economic driver, with a $470 million annual operating budget and status as one of Missouri’s top 10 employers. The base trains soldiers from all branches of the military.  Its Maneuver Support Center of Excellence delivers engineer, chemical, biological, radiological and nuclear defense and military police across the range of military operations.

Savre told roughly 50 attendees how the diverse training at Fort Leonard Wood can help accomplish any mission. “My vision is that no matter where you go around the world, where there is a critical mission, you can find a leader, a soldier, a capability that came from Fort Leonard Wood,” he said.

He also shared his optimism about those now in training. “We have never had a better generation of young women and men than we do right now,” he said. “They are intelligent, diverse in their thinking and eager for leadership.” He went on to say the mission of Fort Leonard Wood goes beyond military capability: “We don’t just turn people into soldiers; we try to make them better people.” He noted that many soldiers are volunteering their free time in communities across the state, including Springfield.

Savre talked about ways soldiers are invested in the Springfield community, including the many soldiers and family members attending Missouri State University or Ozarks Technical Community College.

“I know on the weekends when I see families out early, packing up all the kids in the car, they are heading to Springfield to spend their day and their dollars here,” he said. “To get to the big city with a lot of options for dining, shopping, entertainment and access to a top airport; Springfield is where our military families come and we appreciate all that Springfield has to offer.”

One of eight military bases recognized as a Center of Excellence, Fort Leonard Wood is a state of the art installation with specialized training and unique facilities. It has the lead in the Army for homeland operations including FEMA and the Corps of Engineers. The fort supports a population of more than 25,000 people, including soldiers and their families, and trains more than 80,000 soldiers annually.