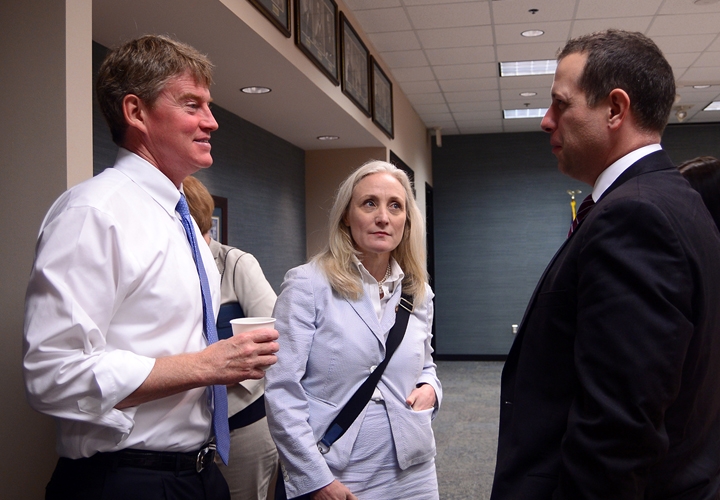 Even though the state legislative session wrapped up in May, the Chamber continues to connect members with state-level decision-makers. Numerous state leaders were in Springfield in June to share their stories and field questions from members.

Springfield metro community leaders gathered June 9 at the White River Conference Center to recognize the work of the Springfield delegation to the Missouri Legislature.

The annual Legislative Thank You Luncheon was presented by the Springfield Metro Partnership, and nearly 80 community and business leaders were on hand to thank local legislators for their efforts in Jefferson City. That session saw several advances in Chamber priority areas, including:

When Rep. Lincoln Hough visited the Chamber to speak to the Governmental Relations Committee, he offered a look back at six years as representative of the state’s 135th district, covering the eastern portion of Springfield. He will not run for reelection in November, instead running for the Greene County Commission seat being vacated by Commissioner Roseann Bentley.

The representative served as chairman of the House appropriations committee for revenue, transportation and economic development. He championed funding for early childhood education, pushing to give local municipalities the option to ask citizens for a sales tax to support early childhood programs. He also pointed to successful passage of the Missouri Works program, meant to give small businesses training and access to business development incentives. Hough says the legislature needs to remember the importance of supporting small businesses.

In addition, he praised the Chamber’s advocacy efforts, saying the face time Chamber staff and members have had with legislators makes a difference in bringing Chamber priorities to the fore.

On transportation, he noted that the state government has a responsibility to invest in infrastructure; the state has the nation’s seventh-largest road system but lags behind in funding.

Koster said his office has brought several notable lawsuits including one related to the “robo-signing” of legal documents in the wake of the mortgage meltdown, in which the state won a $356,737 judgment against a Florida company in 2015. In February, his office won a settlement with mortgage lender HSBC that affects more than 2,600 Missourians who lost their homes to foreclosure.

He had a bleak projection on early childhood education funding: “I don’t know how in Jeff City they’ll be able to fund early childhood education when they continually struggle to fully fund the K-12 foundation formula.” Koster suggested municipalities may fare better enacting their own programs rather than waiting for Jefferson City to take action.

Last year, Maj. Gen. Kent D. Savre became Commanding General of the Maneuver Support Center of Excellence and Fort Leonard Wood. On June 23, he made his first official visit to the Chamber to provide members with an update on what is happening at Missouri’s largest military base.

Savre told roughly 50 attendees about his vision for the impact of Fort Leonard Wood and how its goals of providing diverse training can help accomplish any mission that may come its way. “My vision is that no matter where you go around the world, where there is a critical mission, you can find a leader, a soldier, a capability that came from Fort Leonard Wood,” he said.

He talked about the various ways soldiers are invested in the Springfield community, including the many soldiers and family members attending Missouri State University or Ozarks Technical Community College.

“I know on the weekends when I see families out early, packing up all the kids in the car, they are heading to Springfield to spend their day and their dollars here,” he said.