Reflecting on six years in the Capitol 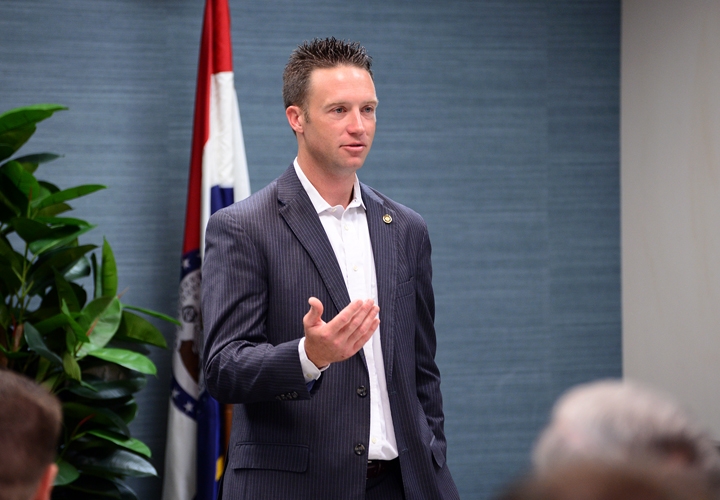 When Lincoln Hough visited the Chamber June 10 to speak to the Governmental Relations Committee, he offered a look back at six eventful years as representative of the state’s 135th district, covering the eastern portion of Springfield. He will not run for reelection in November, instead running for the Greene County Commission seat being vacated by Commissioner Roseann Bentley.

During his service, it was a busy time for the representative, who served as chairman of the House appropriations committee for revenue, transportation and economic development and has been an advocate for several issues including early childhood education funding and the Missouri Works program.

“Very few members of the legislature truly understand the breadth and complexity of the budget,” said Mike Haynes, regional director of external affairs for AT&T and the committee’s chair. “Lincoln is one of those that do.”

Hough was able to join the budget committee during his first term when a then-current member left the legislature. That was in 2010, when the economy was still struggling to pull out of the recession. Some questioned why he would want to join a budget committee in a down economy, but his reasoning was simple: protecting important items that needed funding.

“I thought it was important to be on the budget committee during tough financial times because you can work to protect your community and existing funding streams,” he said. “If you’re not at the table, sometimes you’re on the menu.”

Hough championed funding for early childhood education. Hough said that after talking with many in his home district, he realized the importance of investment in that area. He spent many hours in Jefferson City pushing to give local municipalities the option to ask their citizens for a sales tax to support early childhood programs.

He also pointed to success in passage of the Missouri Works program, which is meant to give small businesses training and access to business development incentives. Hough says the legislature needs to remember the importance of supporting small businesses.

Above all, Hough said, he’s proud to represent southwest Missouri. “The fact that organizations in our community work together the way we do is amazing,” he said. “And it has made my job in Jefferson City a lot easier.”

He also had praise for the Chamber’s advocacy efforts, noting that the face time Chamber staff members have had with legislators in the Capitol makes a big difference in bringing Chamber priorities to the fore.

“Southwest Missouri is no longer a bi-directional, outlying area of the state,” he said. “People know Springfield and they appreciate what we do.”

During his time in Jefferson City, Representative Hough was a tremendous supporter of Chamber priorities including legislation related to economic development, job creation and workforce training. In addition to fighting for early childhood, he was key in securing funding for tourism, the arts and transportation, and he led the charge in the House for passage of a bonding proposal that provided necessary resources for Ozarks Technical Community College and Missouri State University.

“It has been an honor to work on behalf of a community that works together for the greater good,” Hough said.