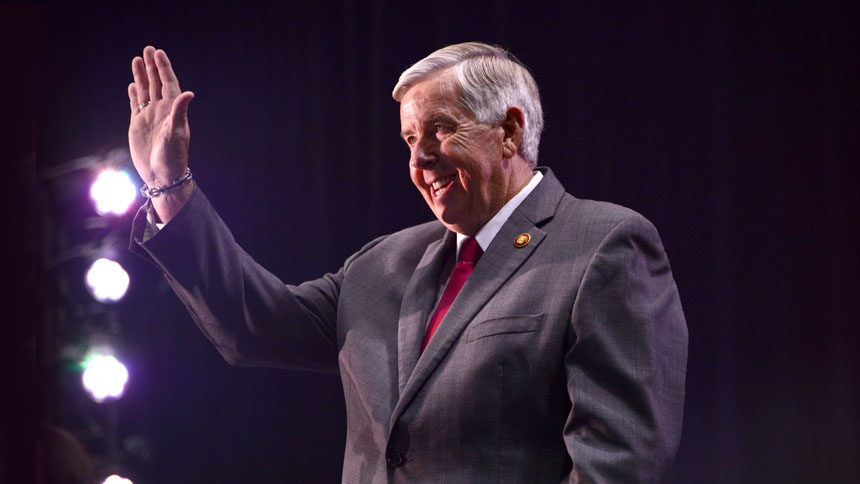 The Chamber’s fourth annual State of the State event, held at JQH Arena on the Missouri State University campus on July 27, featured Missouri Governor Mike Parson touting the state’s continued economic strength and recovery from the COVID-19 pandemic, while encouraging eligible Missourians to get vaccinated in an effort to slow the spread of the virus.

The governor spoke to a group of roughly nearly 400 business and community leaders about the state’s strong economic position and continued recovery from the economic impacts of the pandemic.

He called Missouri “a hub for new economic activity,” pointing to more than $780 million in new business investment creating thousands of new jobs statewide since the beginning of 2021, including projects such as the expansion of John Deere Reman in Springfield that will add 130 jobs. These numbers do not even include the nine projects announced in the Springfield region in 2020 that are expected to create more than 1,000 new jobs in our area and nearly $290 million in new capital investment.

Parson also cited the drop in unemployment since the early months of the pandemic, noting that the state’s unemployment rate stands at just over 4 percent – well down from its double-digit highs in late spring and early summer 2020.

“Missourians are getting back to work even as the state and nation are facing significant labor shortages,” he said, noting that Missouri was one of the first states to end access to additional unemployment benefits to encourage people to return to the workforce. “Missouri’s economy is strong. More and more jobs are coming to Missouri each day, and our economy is on the right track and continues to expand.”

In terms of the state’s pandemic response, the governor encouraged all eligible Missourians to get a vaccination if they haven’t done so already. The Chamber and Missouri State tried to help encourage those efforts by offering an on-site vaccination clinic during the event.

Gov. Parson also pointed to legislative successes this year, including the passage of a long-awaited increase to the state’s fuel tax to fund infrastructure improvement across the state.

“Quality roads and bridges increase efficiency and safety, promote tourism, business investment, save money and save lives,” he said, noting that the tax increase could generate as much as $450 million per year in new roads funding.

He also pointed to the passage of a statewide Prescription Drug Monitoring Program, COVID-19 liability protection for businesses, and the legislature addressing the Wayfair issue by offering a way to collect sales and use taxes from out-of-state businesses without a physical presence in the state.

“With more than 570,000 small businesses in Missouri, it was past time to establish a 21st-century tax code that benefits Main Street businesses,” Parson said.

Thank you to the organizations that sponsored the day's event: