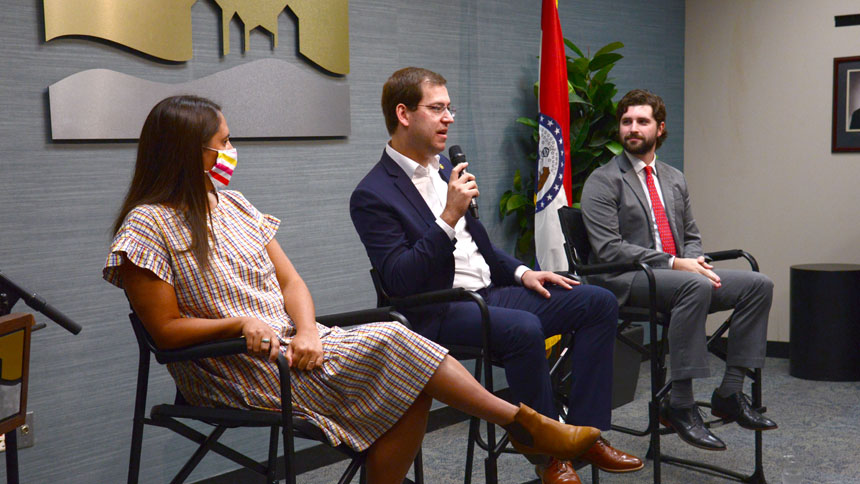 Working across the aisle for the betterment of the community was a common thread at the Chamber's Governmental Relations Committee meeting with three first-term lawmakers from the Springfield area.

Representatives Bishop Davidson, Betsy Fogle and Alex Riley were all elected to serve in the Missouri House in November 2020 and completed their first regular legislative session in May.

During the July 16 panel, Chamber members had the opportunity to hear more about what inspired these legislators to run for office, the experience of their first year, and what priorities they hope to focus on moving forward.

Representative Davidson (R-130) wasn’t initially looking to run for public office; however, his love of history and political philosophy fueled his desire to serve Missourians in this way.

Throughout his first term, Rep. Davidson said he learned a wealth of information about the legislative process and was able to use his background in education to focus on priorities in this area, like expanded access to teacher certificates and education reforms that would not necessarily reshape policy, but improve the district model already in place.

“I wasn’t expecting much, like maybe getting a few bills voted out of committee,” he said. “But I got a lot further than what I anticipated, partly through bipartisan conversations and efforts.

Next year, he hopes to continue focusing on education policy, as well as expanding broadband in Missouri, supporting initiative petition reform, and reducing government regulations.

Representative Fogle’s (D-135) background in healthcare motivated her to run for office.  Prior to her public service, she was the Director of Program Advancement for Jordan Valley Community Health Center and saw the vast healthcare needs of the community firsthand.

She currently serves as one of two House Democrat members from the southern portion of Missouri, which is also the super-minority party in the General Assembly. This gives her a different perspective on strategy and the importance of bipartisanship to get her priorities passed, including working with both Davidson and Riley on legislation.

“Each of us looks at things from a different perspective,” Rep. Fogle said. “Diversity of thought is what makes Springfield beautiful.”

In the coming year, she hopes to continue focusing on expanding Medicaid, educating on importance of getting the COVID-19 vaccine, investing in early and K-12 public education, and increasing access to healthcare.

Representative Riley (R-134) represents south central Springfield, the seat previously held by Speaker of the House Elijah Haahr. Outside of his legislative duties, he is a business defense lawyer with McAfee & Taft, which influenced both his decision to run and his policy priorities.

He is focused on improving economic issues and quality of life. This includes creating a more favorable business climate through regulatory reduction and judicial reform, both of which will be priorities for him in the next legislative session.

Rep. Riley also discussed his intentional effort to look at other areas and states to see what best practices can be brought back home, in a method similar to the Chamber’s Community Leadership Visit.

Both Riley and Fogle serve on the coveted House Budget Committee, which is responsible for drafting and approving the House version of each year’s new fiscal budget. They each played key roles in achieving critical funding allocations for Springfield entities and programs.

The topic of the state’s good-standing budgetary position was discussed in conjunction with the divisive subject of expanding Medicaid in the state, as that legal process is still ongoing and heavily impacted the 2021 session.

However, even though Representatives Davidson, Fogle and Riley may have different opinions on many policy positions, they all agree on the importance of doing the right thing for our community, region and state.