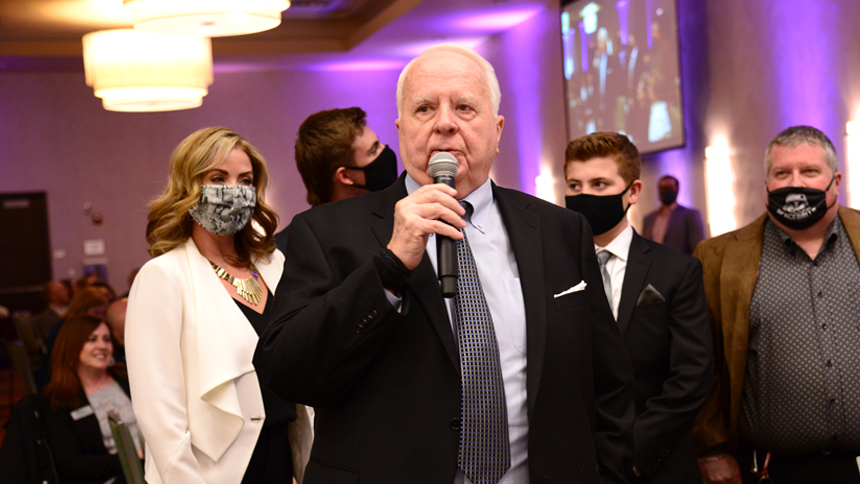 An incredibly strong work ethic and a willingness to take a chance on projects others might find too risky are defining characteristics of Warren Davis. Those qualities, along with a lifetime of achievements and dedication to the area, were celebrated on May 7 as the Springfield Area Chamber of Commerce presented Davis with the 2021 Springfieldian Award.

The announcement was the culmination of the Chamber’s Annual Meeting, held this year at the Oasis Hotel & Convention Center. The Springfieldian is the Chamber’s most coveted honor, given each year to an individual who exemplifies outstanding community service, excellence in his or her field and dedication to improving the quality of life for Springfield and its citizens.

Warren was born and raised in nearby Bolivar, the oldest of three siblings. He came to Springfield to attend what is now Drury University; after graduating in 1959, he would marry fellow Drury student Anne, now his wife of 61 years.

He served in the National Guard for 9 years and completed his MBA at Drury before moving back to Bolivar to join his father’s business, Orval Davis Tire Company. Warren would eventually buy half the business from his father and expand it into one of the largest tire sales companies in the four-state area. Over the years, he supported and served on the boards of numerous Bolivar-area community organizations, including the Rotary Club, Bolivar YMCA, the library, Southwest Baptist University, the Bolivar school board, and the Bolivar Methodist Church.

Warren’s father passed away in 1993, and Warren retired from the tire business soon after. But his ingrained work ethic wouldn’t let him stay retired for very long.

Daughter and co-owner of Davis Properties Kim Harrington concedes, “That determination, that fierce will is what he's all about. Nothing's going to get him. He's tenacious."

Retirement, in fact, lasted only about six weeks before he found himself renting an office on the 19th floor of the Tower Club in downtown Springfield and looking into the possibilities of a second career in real estate.

Warren Davis Properties, founded in 1994, started off with a splash, purchasing the Woodruff and McDaniel buildings in downtown Springfield at a time when downtown redevelopment was not booming. Over the next 25-plus years, the company would buy and sell 88 properties, including the Heer’s Building and the Park Central Office Building downtown, and the former Solo Cup factory on North Glenstone Avenue.

The Solo Cup project demonstrates both Warren’s love of hard work and his willingness to take a risk – the reason he’s been dubbed “The Gambler” by friends. The iconic factory building was an empty 1 million square feet of space when Davis’ company decided to take the leap and redevelop it in 2010. After $22 million in investment, it has nine warehousing and manufacturing tenants that employ some 800 people, and the company built a 200,000-square-foot addition to attract even more tenants. The project also won Warren Developer of the Year honors in 2020 from the Springfield Contractors Association.

He has also made his mark by supporting numerous community and charitable organizations. Warren serves on the board of The Arc of the Ozarks and the Mercy Health Springfield Community Board of Directors. For years he has supported the Developmental Center of the Ozarks, the Ozarks Regional YMCA, Southwest Baptist University’s physical therapy programs, Drury University athletics, the Missouri State University Foundation, Springfield Public Schools and the Springfield Lasers tennis team.

Watch the video announcing the 2021 Springfieldian below!