New maintenance base coming to airport 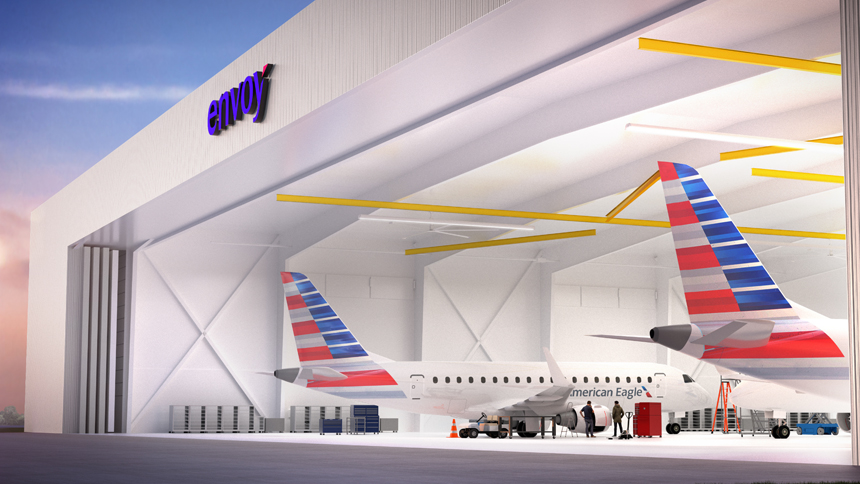 Aviation industry leader Envoy Air Inc., a wholly owned subsidiary of American Airlines Group, has announced plans to expand its aircraft maintenance operations in Springfield by moving into a new and bigger facility at the Springfield-Branson National Airport. This expansion will allow Envoy to maintain more modern aircraft, which will create more jobs in the Springfield region, as well as additional potential for enhancements to air service in the future.

Envoy provides regional flight service to American Airlines under the American Eagle brand and ground handling services for many American Airlines Group flights. The company was founded in 1998 as American Eagle Airlines, Inc., following the merger of several smaller regional carriers to create one of the largest regional airlines in the world. Envoy is headquartered in Irving, Texas, with hubs in Dallas/Fort Worth, Chicago, New York and Miami, with a ground handling operation in Los Angeles.

American Airlines has been flying commercial air service since 1936 and transporting passengers to and from Springfield since 1946. In recent years American has grown to become the largest airline in Springfield. In 2019 it flew 41% of total passengers with daily service to Chicago, Dallas/Fort Worth and Charlotte. Envoy has maintained smaller aircraft from a hangar in the general aviation area since 2004 but that hangar cannot accommodate the larger aircraft being flown more in the Springfield market.

The installation, which will be owned by the airport and leased to Envoy, will allow Envoy to service more modern Embraer E-175 aircraft that hold 76 passengers. It will have space to house three aircraft inside, with additional room for more aircraft outside, dedicated areas for parts storage, training, employee parking and administration. While this expansion project has been in development for more than a year, current circumstances have only increased the need for these particular aircraft.

“The new facility will allow scheduled overnight maintenance for up to three E-175 aircraft and provide line maintenance for the daily American Eagle service from Springfield to American’s hubs in Charlotte, Dallas/Fort Worth and Chicago,” said Jay Murray, Vice President of Maintenance at Envoy. “It will be staffed by Envoy employees, including Mechanics, Inventory Control Clerks, Management and Support personnel. We thank state and local officials at the Springfield-Branson National Airport, the airport Board of Directors, and the Chamber of Commerce for their continuous efforts and partnership. This new facility will continue to support our operation and help create new jobs.”

Springfield-Branson National Airport leaders have worked for many years to build relationships with corporate real estate leaders at American, laying the foundation for this project. Talks about this specific expansion began in summer 2019 and have continued throughout the pandemic thanks to the efforts of airport leaders and Springfield’s Partnership for Economic Development, which includes the Chamber and SBDC, City of Springfield, City Utilities and Greene County.

“This was a team effort and we are excited these next-generation aircraft will be maintained and operated in Springfield for decades to come,” said airport director Brian Weiler.

Chamber economic development staff worked with American to access statewide incentives, including Missouri Works and Missouri One Start Customized Training to help meet the airline’s specific needs for this facility. In addition to creating new jobs and investment, this expansion demonstrates American’s commitment to ongoing air service in the Springfield region. The project will also benefit Missouri as a whole with new jobs that will attract and retain talent from aviation training programs around the state.

“We’re excited to see Envoy Air grow and expand in the Springfield region,” Governor Mike Parson said. “These new jobs and investment are great news for the state of Missouri that will help reinforce our connectedness to neighboring states and the entire country.”

Note: The American Airlines announcement is part of a successful year of project announcements in 2020. Click here to read more.