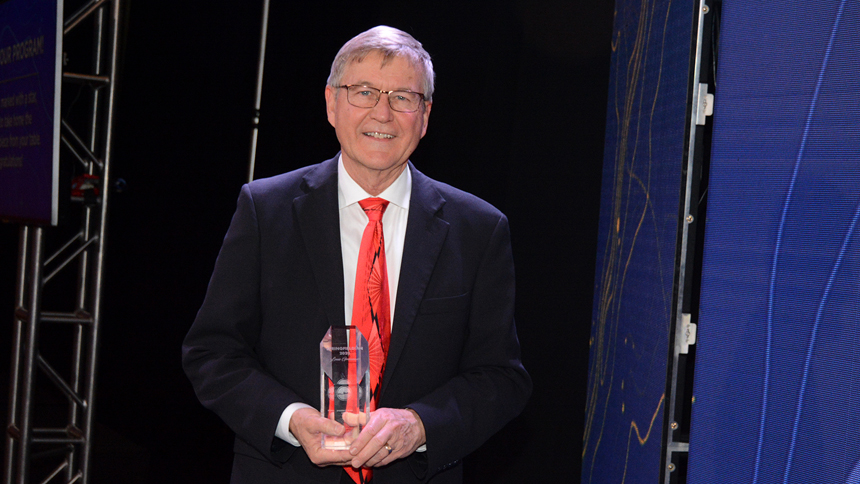 A desire to quietly lead by example and an unquenchable thirst for knowledge are the qualities most commonly used to describe Louis Griesemer. Those qualities, along with a lifetime of achievements and dedication to our community, were celebrated on January 31 as the Springfield Area Chamber of Commerce presented Griesemer with the 2020 Springfieldian Award.

The surprise announcement was the culmination of the Chamber’s Annual Meeting, attended by more than 1,000 people at University Plaza Convention Center. The Springfieldian is the Chamber’s most coveted honor, given each year to an individual who exemplifies outstanding community service, excellence in his or her field and dedication to improving the quality of life for Springfield and its citizens.

Louis is a longtime Springfield resident. After earning a bachelor’s degree in applied mathematics and computer science from Washington University in St. Louis, he entered the family business, starting as a safety director and mine planner for Griesemer Stone Company in 1977. He worked his way up through the ranks until becoming president of Springfield Underground in 1994. He served in that capacity until the end of 2017, when he turned over the president and CEO role to third-generation family member John Griesemer. Louis continues as the chairman of the board for parent company Erlen Group, which also manages Joplin Stone, Westside Stone, Cold Zone, Umlaut Industrial and The Frisco Building.

“He has been at the helm of a family business and has led that organization through periods of dynamic expansion to the point where this business has become one of the most significant assets of our region,” said longtime friend and colleague Ann Marie Baker, president of UMB Bank. “(Springfield Underground) really does set us apart in many ways from other areas of the country.”

His contributions to the community, like his personal interests, are numerous and varied:

“Louis is the kind of leader that exemplifies this award,” said friend and colleague David O’Reilly of O’Reilly Auto Parts. “He always approaches whatever he’s doing in a very informed way.”

Louis and his wife, Caroline, reside in Springfield. They have three children:  Christina, Alice and Andrew, and four grandchildren with a fifth on the way.

Check out the video below that announced Louis' honor during the 2020 Annual Meeting!