A look at history, and a look to the future 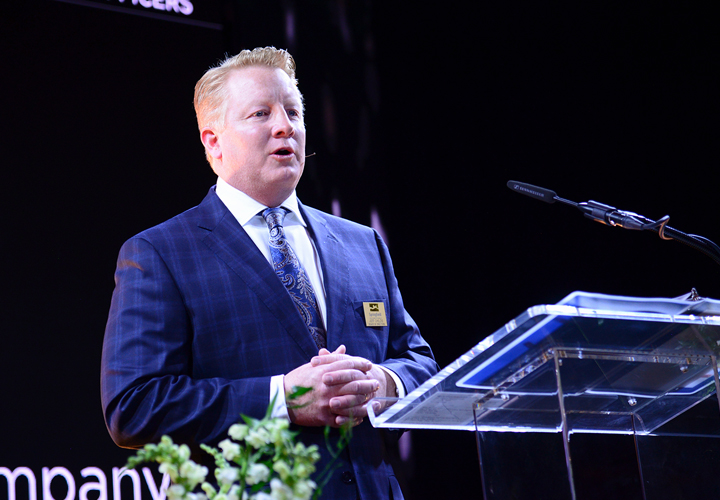 Chamber members helped us celebrate a milestone anniversary, as well as a year of accomplishments, at our Annual Meeting on January 25, while our volunteer leaders helped us reflect on the past and look to the future. Nearly 1,100 people packed the University Plaza Hotel & Convention Center to join in the festivities, which included honoring the volunteers that helped lead the Chamber in 2018.

The highlight of the evening, as it is every year, was the presentation of the annual Springfieldian award. This year’s recipient was community and business leader Gordon Kinne. His family, friends and colleagues honored him for his lifetime of dedication to the Springfield community, which he has supported since attending Missouri State University as a student more than four decades ago.

The event would not have been possible without the support of numerous sponsor organizations:

Outgoing Chamber board chairman Doug Neff of Commerce Bank looked back at 2018 and continued his message of positivity about Springfield and where the community can go in the future.

“We are not done. What we need to do now is continue to build on the momentum,” he said. “We – and I do mean we, because it takes all of us – must continue acting as messengers for the community. It is our responsibility to share that Springfield is a great place!”

He was followed by 2019 chairman Jeff Childs of SVN/Rankin Co., who offered his view of the city and the Chamber’s role in its continued growth. He said that Springfield has many great assets on which to build, but that the time for action is now.

“We must put ourselves in a position for opportunity. We have a lot of potential, and I don’t know about you, but I’m tired of waiting. I’m ready to help make great things happen,” he said. “It’s going to take people having the courage to step up, move past talking, and take action. The time is now to put our community in position for the opportunities of the next 100 years.”