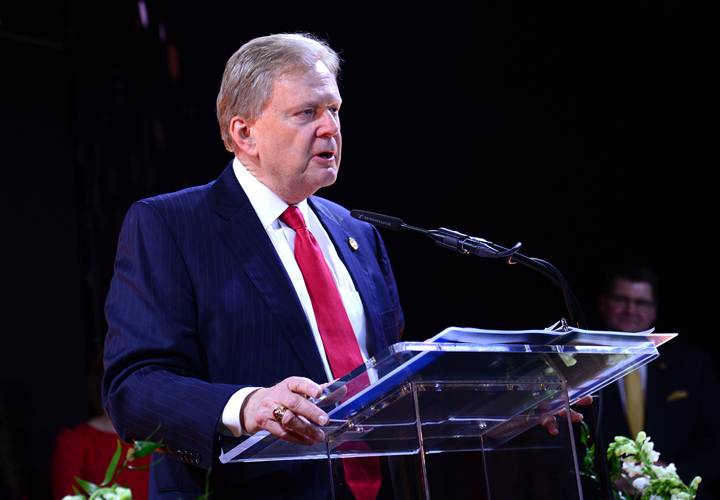 A dedication to his community, family and business are top of mind for anyone describing Gordon Kinne. Those attributes were celebrated January 25, when the Springfield Area Chamber of Commerce named Kinne the 2019 Springfieldian award recipient.

The surprise announcement was the culmination of the Chamber’s Annual Meeting. More than 1,000 people attended the Chamber’s largest annual event at University Plaza Hotel & Convention Center. The Springfieldian is the Chamber’s most coveted honor, given each year to an individual who exemplifies outstanding community service, excellence in his or her field and dedication to improving the quality of life for Springfield and its citizens.

(Scroll down to see the video that announced Gordon's honor!)

Kinne is a lifelong Missourian; he was born in Hamilton, Mo., raised on his family’s farm there and graduated from Hamilton High School in 1970. He later moved to Springfield to attend what is now Missouri State University (MSU) – an institution with which he enjoys a lifelong connection. He earned his bachelor’s degree before entering the field of insurance.

In 1984, Kinne founded the third-party administrator (TPA) and full-service employee benefits brokerage firm Med-Pay, Inc., a company for which he still serves as president and owner today. With nearly 50 employees, Med-Pay is one of the largest independently owned TPAs in Missouri, partnering with a diverse mix of employers from the private and public sector for both fully-insured and self-insured benefit plans. Its clients include large regional employers, small businesses, municipalities, school districts and institutions of higher education.

He also serves as Secretary/Treasurer for the Board of Directors of the national association of third-party administrators, the Society of Professional Benefit Administrators (SPBA), which works to build best practices for the self-insured industry, and serves as a resource to the various federal departments that regulate the employee benefits industry.

Gordon continues his connection with MSU, serving as chair of the MSU Foundation’s Board of Trustees. He also has been a board member and past president of the MSU Alumni Association, and past co-chairman of the Bears Fund, as well as an active supporter of Bears athletic programs.

Kinne has a strong passion for helping charitable organizations. He has offered his time and energy to a number of organizations in the Springfield area, including the Ozark Empire Fair, the Missouri Sports Hall of Fame, the Breast Cancer Foundation of the Ozarks, Lake Country Soccer and the Council of Churches of the Ozarks. He also financially supports numerous other local charities.