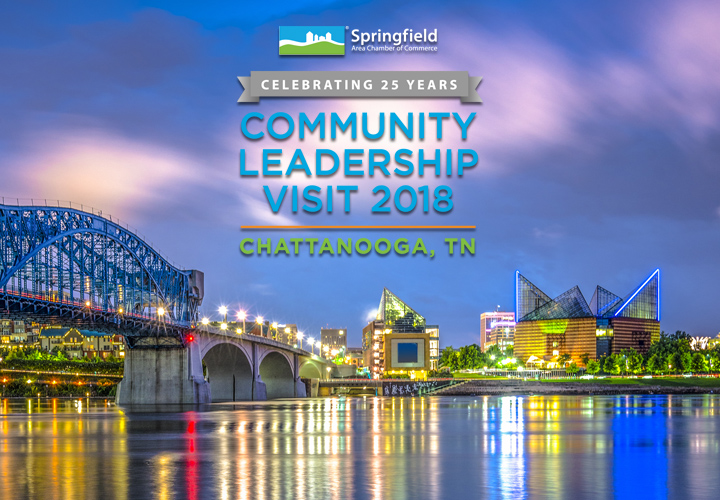 When the Chamber took nearly 80 community, business, education and nonprofit leaders to Chattanooga in mid-September, it was the second time a group from Springfield had visited the Tennessee city since the Community Leadership Visit program began in 1994.

A lot has changed in Chattanooga since our initial trip there in 1998. Much of the change has come from a focus on the area’s natural beauty and developing the region’s workforce—and all driven by an inclusive planning process with an emphasis on follow-through.

(Click here to read our full report on the trip.)

Catalyst for change
It wasn’t always this way. Chattanooga used to face a pollution problem, so much so that it was called out by national news icon Walter Cronkite in 1969 as the “dirtiest city in America.”

“The city that I grew up in was dying; it was a steel and foundry town, a valley surrounded by mountains, and the smoke was trapped by the valley, and it polluted our air and water,” said Chattanooga Mayor Andy Berke.

He says that the creation of the Environmental Protection Agency and federal pollution standards spurred the city to address the issue – but it occurred at the same time that much of the manufacturing base moved out of the country in search of lower costs, taking jobs and investment with it.

“When my friends and I graduated high school in the late 1980s,” Berke added, “our thought was, ‘so long, maybe I’ll come back and visit.’”

But since that time, the city has undergone a thorough transformation. One of the main focal points of the city’s long-term economic revitalization, the Tennessee Aquarium, was thriving even at the time of our first visit. It opened in 1992, shattering initial attendance projections and bringing in millions in revenue.

It would have been hard to imagine when that facility opened 26 years ago that it would be one of the catalysts for $5 billion in private development in the city’s downtown. But that’s precisely what has happened.

Plan the work, work the plan
None of the growth has been by accident. The city has had multiple visioning sessions over the years, creating plans for how to improve various issues – the economy, the schools, housing, the arts scene and more.

And they’ve been intentional in how they execute those plans, too. For the riverfront development plans, the non-profit River City Company was created in 1983. Initially funded by a combination of private dollars and city and county investment, its sole purpose is to wake up each day working to make the region’s vision a reality.

“We had a 20-year master plan, but we needed an organization to make it happen,” says River City Company President and CEO Kim White. “It doesn’t happen by itself – you need focus and direction. River City Company was created to do that.”

That approach extends to building design as well. The Chattanooga Design Studio was initially founded in the early 1980s as a go-to source for developers to make sure the designs for new and renovated building projects downtown fit the desired aesthetic for the city. And while the organization doesn’t have final say over design decisions, developers are strongly encouraged to seek the studio’s input before proceeding to the city for project approval.

“The studio’s fingerprints are all over projects from center city to the riverfront,” said Eric Myers, the studio’s executive director since March 2017. “As a city, we’re always thinking about how we build the city for both today and tomorrow. We try to build collaboratively; and I think without an organization like ours, that doesn’t happen.”

One upshot from this comprehensive, collaborative approach is that most city leaders are on the same page and have a positive outlook for the city, even when it comes to addressing challenges.

“One of my jobs is to be the champion. It may not sound like a lot, but it’s a big part of what I’m supposed to do,” said Mayor Berke. “I keep saying, what’s happening here is really awesome – and it’s really happening. We’re not just saying it. It’s about telling the story to people.”