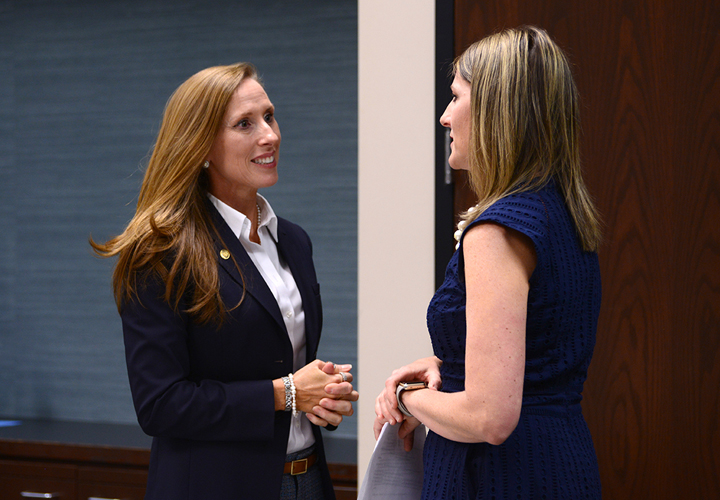 Holly Rehder is not afraid to tell people her story and how it has brought her to her current position – and she did just that when she visited the Chamber August 17 to speak with the Governmental Relations Committee.

The state representative who just finished her third term representing the Sikeston area grew up in a home of drug abuse and domestic violence. She quit school at 15 to take care of her family and had her first child at age 16. One of her daughters has struggled with opioid addiction, the result of a prescription following an accident.

But she has persevered.

She went back to school and earned her GED, followed by a degree from Southeast Missouri State University. And when her husband lost his job after 16 years due to a company restructuring, the two formed their own telecommunications company that now works with 13 cable companies in seven to 10 states.

“I realized there were so many people in the legislature that didn’t have a lot of knowledge about what it was like to really struggle,” she said, noting that was when she decided to work for Rep. Jo Ann Emerson’s office to better understand the political process. “From her, I learned the value of constituent services – and I decided to run for office.”

It’s no surprise that one of her most passionate causes has been a statewide prescription drug monitoring program, similar to the one passed on the local level in both Springfield and Greene County. She said she thinks momentum is finally building toward that program, potentially next session.

“My daughter has been clean for four years now and is the best mom I know, but it was a long road,” she said. “We need more treatment, more beds – and less lockup of people with those issues. We have many years of data that shows us what works, and what works is treatment.”

She noted that the process of recovering from addiction and staying clean takes years – and Springfield has one of the best recovery networks in the state. She added that advances have been made, including allowing for drug-assisted treatment in conjunction with the drug court program.

Rehder is also a strong supporter of economic and workforce development issues, to help people get the training they need to find good-paying jobs. While the recently ended legislative session saw some progress in the area of workforce development, she said there’s more work to do.

“Students need a bridge if they’re going to work right out of school; when you grow up not seeing people go into college, you don’t even think about that as an option,” she said. “We’ve really increased our graduation rates, which is fantastic, but getting people gainful employment after graduation is the next key part of the equation.”