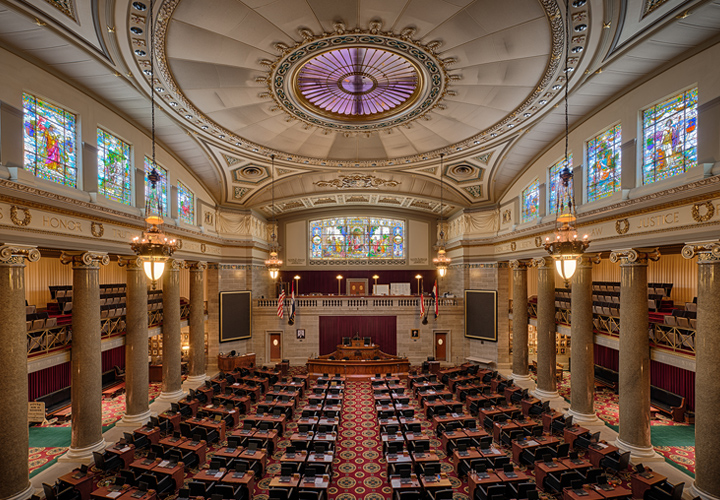 The Missouri Legislature wrapped up its second regular session of the 99th General Assembly on May 18th. In a tough session with many distractions, House and Senate leadership were keenly focused on passing critical legislation, resulting in one of the more productive sessions for Missouri’s business community in recent memory.

The Chamber maintained a weekly presence in the Capitol and saw several priority bills cross the finish line. Here’s a summary of where things stood at the end of the 2018 legislative session.

Economic Development
One of the Chamber’s top priorities was the reauthorization of the Missouri Works and Missouri Works Customized Training Programs, which were set to expire in August of 2019. These are the state’s primary economic and workforce development incentives and are vital for job creation and growth. Sen. Jay Wasson carried legislation to reauthorize these tools, and the Chamber thanks the legislature for their passage in the final day of session.

Sen. Wasson also carried SB 629 to restructure state Tax Increment Financing (TIF). The current allotment of TIF money at the state level has been utilized by the Cerner project in Kansas City. SB 629 takes Cerner out of the equation for the state TIF cap and creates a new overall cap as well as a $3 million cap for individual projects. Through Sen. Wasson’s leadership and handling by Rep. Rocky Miller (R-124) in the House, the bill passed in the final days.

Additionally, the General Assembly took steps to reform the state’s tax credit program, an ongoing debate in the capitol for many years. SB 590, sponsored by Sen. Dan Hegeman, changes the cap on what the state can invest in historic preservation from $140 million to $90 million. Missouri has previously had one of the highest caps on historic preservation. This change will allow the state to prioritize investment in historic building redevelopment while ensuring it is not negatively impacting the state budget.

Last session, the General Assembly passed legislation making Missouri a right to work state. Soon after the Governor signed the bill, a referendum effort began. Repeal measures were set to appear on the November ballot, but at the end of the 2018 session, the legislature passed a measure to move the election date to the August 7 primary ballot.

Infrastructure
Support for transportation infrastructure is consistently a top Chamber priority. A provision in HB 1460, carried by Rep. Jean Evans (R-99), would increase the state gas tax by 10 cents per gallon over the next four years to help pay for road and bridge repairs and help fund the Missouri Highway Patrol. This gas tax increase will go to a vote of the people on the November ballot.

The legislature also passed HB 1872, sponsored by Rep. Delus Johnson (R-9) and HB 1880, carried by Rep. Curtis Trent (R-133), related to the expansion of rural broadband. These included the creation of a grant program to support broadband installation and also would help rural co-ops in broadband deployment. The grant program will be subject to appropriations by the General Assembly.

Education
Visiting scholar legislation passed early in session had nearly unanimous support in both the House and Senate. HB 1665 carried by Rep. Kathy Swan (R-147) will make it easier for business professionals to teach in GO CAPS classrooms without needing a teaching degree. Rep. Jeanie Lauer’s HB 1415 also passed this year, allowing teachers to use their externship hours for professional development.

Additionally, HB 1465, carried by Rep. Steve Cookson (R-153), was truly agreed upon this session. This would expand the ability of MSU and OTC to offer advanced degrees, allowing these institutions to continue to meet the demands of the workforce.

Budget
The legislature’s final state budget for the fiscal year of 2019 included many victories for this region and the entire state.

The Foundation Formula for K-12 education will be fully funded for the second year in a row, which equates to a $98 million increase and $50 million in funding dedicated to early childhood education. The Governor’s budget included a recommendation of $68 million in cuts to higher education funding, but the final spending plan approved by the General Assembly restored this cut in conjunction with a pledge by the state’s universities and colleges to raise tuition by no more than 1 percent. The budget also included 60 percent of funding for the Springfield Clinical Campus partnership with CoxHealth, Mercy and the University of Missouri, as well as for the mechanical engineering partnership between Missouri State University and Missouri S & T. These funds were rolled into the core budget for the universities.

Tax Reform
There were numerous tax reform measures in the legislature this session, and two made it across the finish line in the final days of session.

Rep. Elijah Haahr carried a bill that cut the individual income tax rate cut from 5.9 to 5.1 percent over time. The cost is planned to be offset by phasing out a deduction for federal taxes. The second bill, SB 884, carried by Sen. Andrew Koenig, cut the corporate tax rate from 6.25 percent to 4.0 percent, taking effect in 2020. To offset that cut, the legislation changes how multistate corporations can calculate their taxable income.

Throughout the session, the Chamber has urged caution when it comes to tax policy because as a state we are underfunded in many areas. Where we are losing to other states has much to do with our lack of investment in workforce development, in infrastructure, in education and other priorities.

The next step in the process is for these bills to be sent to the Governor. With Gov. Eric Greitens announced resignation, effective at 5 p.m. on June 1, Lt. Governor Mike Parson will assume the office of Governor. He has been following the legislation passed by the General Assembly and will take action by the July 17 deadline.