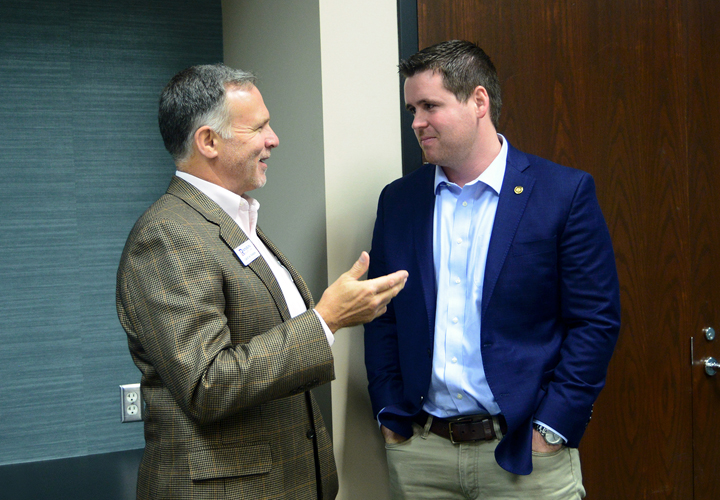 For Rep. Scott Fitzpatrick, (R-Shell Knob), his first year as chairman of the Missouri House Budget Committee was a challenging one based on the state’s $500 million dollar budget shortfall. Despite tough budget choices for the legislature to make, there were many business successes to point to in the 2017 session.

That was the message the third-term representative brought to Springfield on May 19 during a presentation to the Chamber’s Governmental Relations Committee. Fitzpatrick pointed to the numerous Chamber priorities for which funding was restored, or at least partially restored, in the final budget:

Overall, Fitzpatrick noted that many tough choices had to be made, since the budget had to be cut so significantly compared to 2016 due to revenue shortages. He is proud of the work done by the legislature and the focus on passing business priorities that will move the state forward and their focus on quality over quantity of legislation passed. “Especially this year, we shouldn’t measure the success of a legislature by the number of pieces of legislation that we pass,” he said.

In addition to the budget, Rep. Fitzpatrick noted several other legislative successes from the session, including passage of Right to Work legislation, passage of Real ID, tort reform, workers’ compensation reform, and passage of a statewide framework for transportation network companies like Uber and Lyft.

Many of those successes, he added, were proposed or led by legislators from the Springfield region. “Springfield has the most talented legislative representation in the state,” he told the group.

Governmental Relations Committee Chairman Mike Haynes, AT&T, facilitated the meeting and thanked Rep. Fitzpatrick for his hard work and support on so many Chamber priorities. He also noted the strong praise Rep. Fitzpatrick received from both sides of the aisle for his effective and competent handling of the budget process.