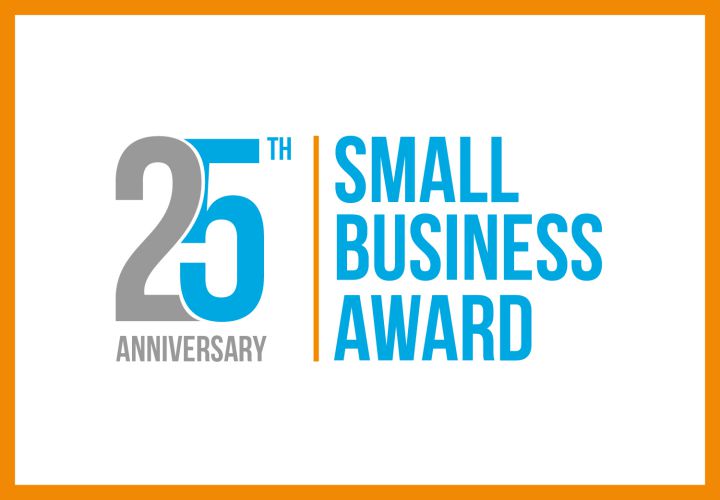 As the Chamber celebrates 25 years of presenting the annual W. Curtis Strube Small Business Award, we're taking a look back and talking to some of the award recipients about what it has meant to their organizations.

Over the 25 years of the Small Business Award, deserving companies from all sectors of the region's economy have been honored. The inaugural award was presented to Terminal Consolidation Company, now TransLand, in 1992. "Our company was celebrating its 10th anniversary when we received the Small Business Award. It told us we had come of age and could achieve loftier business goals," says Chairman and CEO Mark Walker. "The public recognition as an exemplary business was more valuable than any financial metric we had achieved."

Other recipients also recognized the award's ability to serve as a springboard for the future. "The award was a tremendous experience for our team and a transformational moment in the history of our firm," says Brad Erwin of 2014 recipient Paragon Architecture. "It provided us a platform to share our story and approach with the community, and it challenged us to live up to the standard of excellence set by past recipients."

It's a similar story for Connell Insurance, which received the award in 2013. "We had been working the Springfield region for several years at the time and were at the edge of closing some larger clients in the region," says President Tim Connell. "We had just received a small business award the year prior in the Branson area, and this was the catalyst to purchase a location in the Springfield market, permanently changing our company and the way we did business."

For other recipients, the award was more about public recognition. "The Small Business Award provided credibility to our fledgling company, both locally and nationally," says Scott Opfer, president of Opfer Communications, Inc, which received the award in 1996. "Two decades later, the award still ranks as one of our most enduring professional achievements, as it includes us with friends and neighbors in our community who are like-minded entrepreneurs."

It's the same for 1999 recipient ServiceWorld Computer Center, now TSI Technology Solutions. "It was one of the biggest things that had ever happened to our company," says founder Doug Pitt. "We were only eight years old at the time, so we were still somewhat young, and I spent the next decade reminding people about the award. It gave us instant legitimacy as a company - to receive an award like that and be recognized for your efforts in the community was truly monumental."

"It helped make our company a well-known name in the Springfield business community," says Noel Boyer, owner of 2015 recipient All About Trees. "It gave us a feeling of being a legitimate part of Springfield's economy even though we are a very small company, and the recognition has certainly contributed to our company's continued growth."

Boyer is not alone in pointing to the award's ability to help his company grow. TLC Properties, which received the award in 2009, said it helped the company "foster great strategic partnerships with other local businesses and empower incredible credibility and reliability with our customers." And 2011 recipient Ozarks Food Harvest noted how the organization has grown by 70 percent since receiving the honor, infusing a record $29.5 million in food resources into the region in 2016, according to President Bart Brown.

For some recipients, the award was an acknowledgment of a job well done. "It helped everyone here in the firm feel good about the hard work we put in on our projects and for our clients," says Geoffrey Butler, partner and co-founder of 1998 recipient Butler, Rosenbury & Partners, Inc. Recognition was also the key for Rick Hughlett, owner and founder of 2012 recipient Rick's Automotive. "The award is something I had aspired to for many years. Receiving this honor has not only raised the level of dignity for myself, but also for my entire team."

Summing up what the award can mean to its recipients, Dianne Elizabeth Osis, owner of 1997 honoree Springfield Business Journal, said: "This prestigious award remains on our front counter, reminding us that we are truly who we say we are. When the award luncheon comes around each year, we take pride and pleasure in standing up among the best companies in Springfield. It gives the SBJ staff, both then and now, renewed faith in ourselves to be our best."

The award is named after the late Dr. W. Curtis Strube, former director of Drury University's Breech School of Business and the founder and chairman of the Chamber's Small Business Council.

Strube, who passed away in 1997, was devoted to making Springfield a healthy environment to grow new businesses. He also worked tirelessly to advocate for economic literacy, helping to establish the Association of Collegiate Business Schools and Programs, the national accrediting agency for business schools.