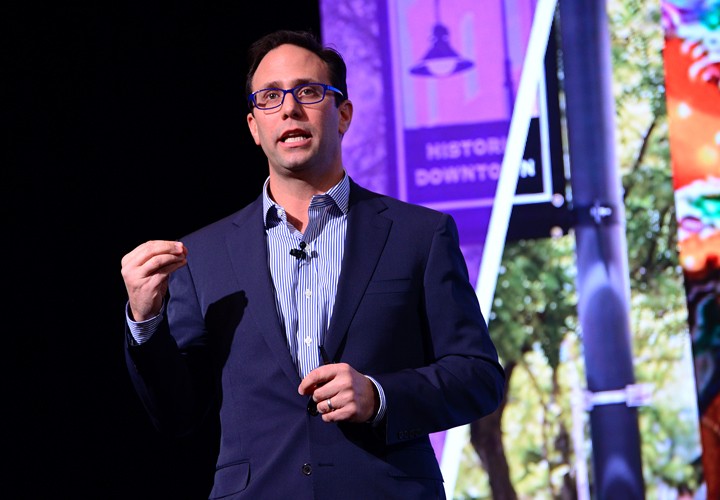 More than 300 community and business leaders were on hand February 8 at the University Plaza Hotel & Convention Center for the Annual Meeting of the Springfield Business Development Corporation (SBDC), the Chamber’s economic development subsidiary. Attendees heard about several high points for the year, as well as information about how the world of communication is changing for businesses.

First off was the unveiling of a new video (scroll down to watch!) demonstrating why Springfield should be a destination for new and expanding businesses. The video is part of a recent rebranding effort for the Springfield region.

That was followed by a recap of 2016 successes by the Chamber’s Senior Vice President of Economic Development, Ryan Mooney, and 2016 SBDC Board Chairman Joe Reynolds. The two noted a number of high points for the year:

These highlights and numerous other stories were captured in the SBDC Annual Report, which was given to all attendees.

The event concluded with a keynote presentation by language and communication expert Michael Maslansky. He spoke about some of the topics covered in his book, The Language of Trust, particularly in the context of the current political environment.

The biggest change, according to Maslansky, is that trust – and with it, the benefit of the doubt – is disappearing. He pointed to the success of President Trump’s campaign as a reflection of four new realities in our country:

He suggested that, whether or not you agree with Trump’s policies or ideas, his communication techniques can act as an example for successful organizations. He said Trump has the ability to communicate directly with people (mostly via Twitter), use simple and direct language and be clearly for and against certain ideas.

So what can companies take from those lessons? Maslansky thinks the key is to be direct and open. “We live in a world where companies are afraid to say what they mean for fear of offending others,” he told the group. “And if you don’t say what you mean, it’s impossible for people to trust you.”