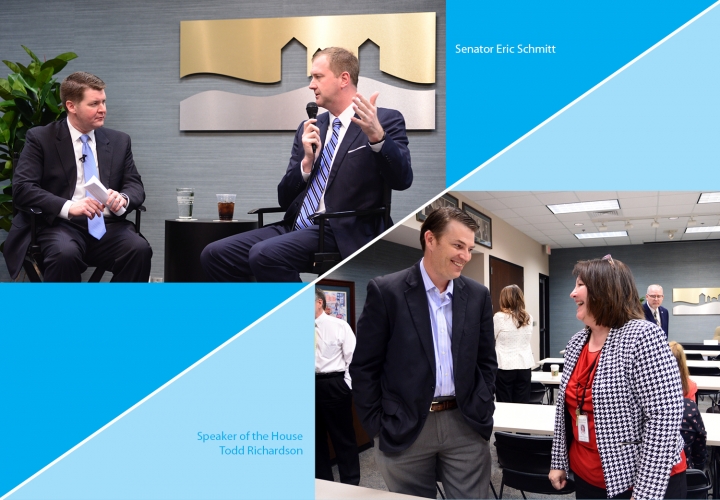 An important aspect of the Chamber’s mission is facilitating connections—between business owners but also between members and decision makers at local, state and national levels

March was a good month for making connections, as two state legislators visited the Springfield Chamber offices to offer their views of state-level progress and listen to the needs of Chamber members.

He addressed several issues of importance to Chamber members:

Following Schmitt’s visit was a March 23 meeting of the Chamber’s Governmental Relations Committee with State Speaker of the House Todd Richardson (R – Poplar Bluff). Speaker Richardson provided Chamber members with an update of what the House has accomplished in the first half of the legislative session: including sending paycheck protection legislation to the Governor and sending multiple ethics reform bills to the Senate.

He then turned to the most pressing need for the remainder of the session: the budget. Richardson said the proposed $27 billion budget includes increases in funding for both K-12 and higher education statewide including increases for Missouri State University and Ozarks Technical Community College. (For more about progress on Chamber priorities, check out our legislative recap.)

Richardson also laid out his vision for how he hopes the House can operate going forward. “We’re very good at dealing with crises,” he said of his fellow legislators. “(But) my focus as Speaker is getting the House to tackle the big problems. We need to be more proactive in addressing those issues.”

He shared ideas in several areas:

Richardson praised southwest Missouri as a bright spot statewide. “This area continues to grow at a rapid pace,” he said, “and it’s a testament to the people here and your focus on finding economic solutions.”