Making the case for better roads 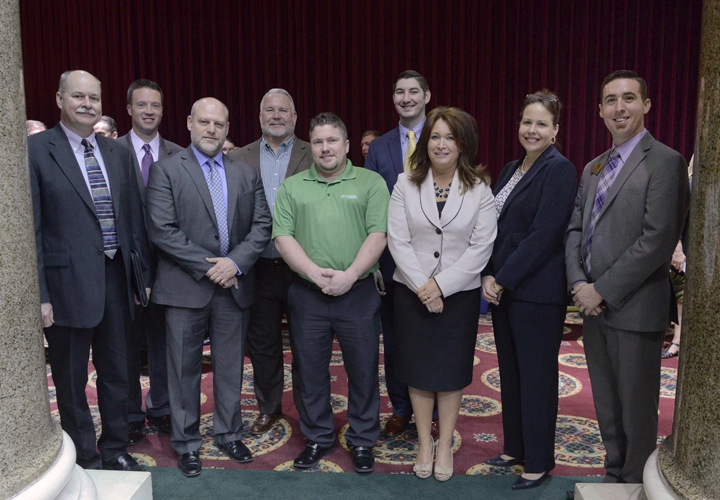 Making democracy work is, well, hard work. Elected officials are bombarded with information from staff, lobbyists, advocates and voters back home. Tweets, texts and emails compete for attention with floor speeches, committee meetings and phone calls. So when a constituent walks into the middle of this cacophony, the effect can be powerful.

Members of the Chamber’s Transportation Committee traveled to Jefferson City March 16 to meet with key decision makers, and their visit had just this effect. The message was simple: Infrastructure investment can be the winning component when competing for jobs and business investment.

The Springfield region was represented by private business including architects and engineers, heavy construction laborers, local government officials, staff from the Ozarks Transportation Organization and the Chamber.

Missouri is a natural hub for transportation, because of its central location. The delegation and lawmakers agreed that funding is vital to the state’s economy, but finding a solution isn’t easy. In back-to-back meetings, the Springfield group spent the day with policy makers, voicing the concerns of business and discussing possible paths forward.

The group had the opportunity to interact with many members of the Springfield local legislative delegation in various meetings throughout the day. In addition, they met with Senate leaders including Transportation Committee Chairman Doug Libla, sponsor of Senate Bill 623, a transportation funding measure, President Pro Tem Ron Richard, and staff from Majority Floor Leader Mike Kehoe’s office. In the House, they met with Transportation Committee Chairman Glen Kolkmeyer and Assistant Majority Floor Leader Kevin Austin of Springfield.

The group heard from legislators that there is significant value in members traveling to the Capitol to talk about legislative concerns and priorities and that these face-to-face visits don’t go unnoticed. Despite having to step away from busy schedules for a day in Jefferson City, the Springfield group felt the impact of its advocacy and will continue to urge legislators to pass a transportation funding solution.