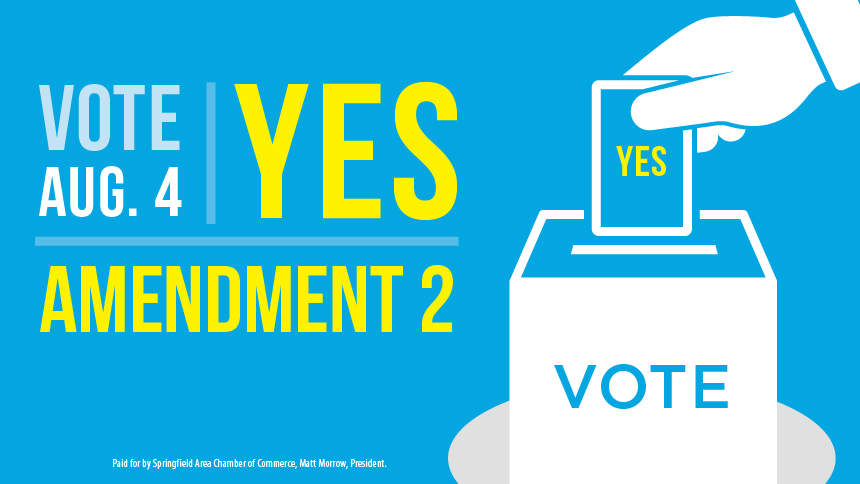 The Chamber is encouraging its members to vote "yes" on Amendment 2 on the August 4, 2020 ballot.

After following a well-established internal process for committee review and recommendation, the Springfield Area Chamber of Commerce is endorsing Constitutional Amendment 2, which will appear on the August 4 ballot. Amendment 2 would provide additional resources to ensure more Missourians have access to health care.

The expansion of Medicaid is anticipated to have positive effects on job creation, economic growth, and on the health and productivity of Missourians, all while protecting rural hospitals, and the impact on southwest Missouri specifically would be significant. The issue has also been endorsed by the Missouri Chamber of Commerce and Industry and Missouri’s other major metro chambers (Greater Kansas City Chamber of Commerce and St. Louis Regional Chamber).

We are currently losing out on federal funds that would benefit Missouri; if Amendment 2 passes, the state stands to benefit significantly from increased federal investment coming back the state. Missouri would join 37 other states that have expanded their Medicaid program to help address the cost of uncompensated care.

The ballot issue was reviewed by the Chamber’s Legislative Policy Committee. The process included presentations from speakers supporting and opposed to Amendment 2. In addition, the Chamber’s legislative policy position has supported Medicaid expansion with transformation for many years. Although a constitutional amendment is not the preferred method – addressing this issue legislatively would have allowed for expansion of the program while also implementing enhanced efficiency and efficacy – Amendment 2 offers a path forward at this time to improved health care coverage and outcomes while also increasing jobs and economic growth in the state.