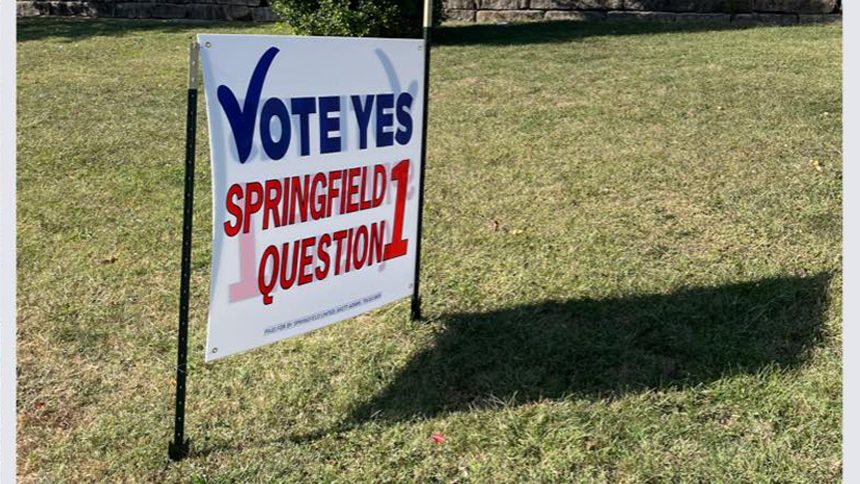 The Board of Directors of the Springfield Area Chamber of Commerce has endorsed a City of Springfield issue on the November 8 ballot pertaining to approval of rezoning an area on South Lone Pine Avenue from Single-Family Residential, General Retail, and Limited Business District to Planned Development.

If approved by voters, (by a simple majority of “yes” votes,) the property would be rezoned and development of the multi-use structures would be allowed to begin. If the ballot measure fails, the property would remain zoned as Single-Family Residential, General Retail and Limited Business District.

The established format of the Local Issues Task Force review meeting is to invite staff of the public entity involved in the ballot issue to provide an educational presentation regarding the ballot issue. Proponents and opponents of the issue are then also invited to present to the task force following the ballot issue overview.

Springfield Mayor Ken McClure spoke in support of the measure. Developer of Planned Development 374, Mitch Jenkins of Elevation Development presented in support of the issue. Representing the opposition were three members of the Galloway Neighborhood Village Association (GVNA) with Melanie Bach, president, making the presentation. Following the presentations, task force members asked questions of both the proponents and opponents of the measure.

Following further discussion, the task force voted to recommend the Chamber Board of Directors endorse the Galloway rezoning proposal on the November 8 ballot.

“We are very grateful to all those who presented on the issue. All presenters did an excellent job and presented very thoroughly,” Local Issues Task Force chairman Marshall Kinne said. “The GVNA is to be commended for their commitment to the character of their unique neighborhood. This sense of ownership and place is key to a vibrant community. However, the task force prioritized the importance of a reliable process for developers if the proposal meets the needed requirements and receives final approval from city elected officials. There was consensus among task force members that there should be trust in city staff and the Planning and Zoning Commission, who recommended this proposal be approved based on ensuring all requirements are met and the process is followed correctly.”

Board Position and Next Steps

Kinne presented the task force recommendation to the Chamber Board of Directors on Monday, September 19. Following that presentation, the Board voted to endorse approval of the ballot measure.

“In general, there’s great concern that the biggest issue is the option to prevent a rezoning through referendum petition. There was broad agreement among the board that the conflict in the City charter that results in Springfield residents voting on zoning issues is problematic for our future growth,” Board of Directors’ member and Vice Chair of Public Affairs Brian Hammons said. “That zoning can be determined by a citywide vote also pits neighbors and developers against one another in a way that is harmful and costly to the individuals involved as well as the broader community. The City should take proactive steps to have this resolved either through legal avenues or through a ballot measure that would revise the City charter.”

A community-driven campaign committee has formed to support the issue. Visit the Vote Yes Springfield Question 1 website to learn more. The campaign also has a Facebook page for additional information.