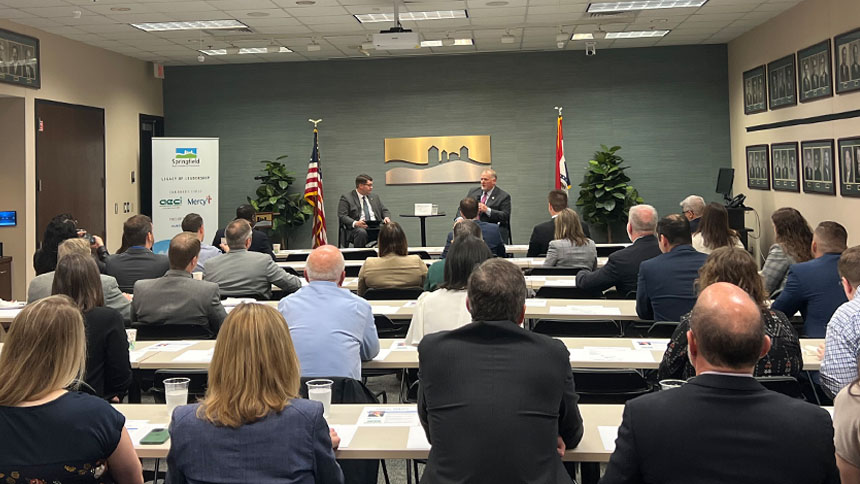 State Senator Dave Schatz has a lot on his plate.

Not only does he represent Franklin and St. Louis counties in the Missouri State Senate, but he also leads the upper chamber as the president pro tem – meaning it’s his job to keep legislation moving through his side of the legislature.

When he visited the Chamber on April 22 for the latest edition of the Public Policy Speaker Series, he minced no words about the difficulty of the task.

“Being president pro tem is like trying to keep frogs in a wheelbarrow; it’s close to impossible,” he said. “When you get 34 personalities together and try to work toward a goal, it’s a challenge.”

Despite the difficulties, Schatz has had success in the past moving difficult legislation through the lawmaking process. Perhaps the best example is the transportation funding that passed in 2021. The legislation, sponsored by Schatz, increases the state’s tax on gasoline by 2.5 cents each year for five years. The new money will provide additional funding for critical improvements and maintenance of the state's transportation system.

“As president pro tem, I began to see the problems facing one of our greatest assets: the state’s transportation infrastructure,” Schatz said. “We hadn’t addressed funding since 1996. I chaired the transportation committee when I served in the House, so when I moved to the Senate, I knew something had to be done.”

He also acknowledged ongoing efforts to repeal this increased motor fuel user fee this session driven in part by the upcoming November election.

“Any tax or funding bill has the opportunity for lawmakers to try to place a repeal or sales tax holiday on the bill,” he said. “So far, we’ve avoided that, but I’m certain there will be additional attempts.”

He added that he would not be opposed to filibustering a repeal proposal: “If it comes to the Senate, I will put on my comfortable shoes and protect what we worked so hard to pass.”

Schatz also acknowledged the difficulty in getting additional business priorities passed this session, due to two looming tasks: the annual budget and the decennial redistricting process, both of which by statute must be completed by the General Assembly.

Despite the difficulty, he specifically pointed to the importance of addressing the complex workforce issue, including extending the life of the state's Fast Track program.

"All employers have the same problem right now: We’re competing for employees that don’t exist," he said. "Everywhere you go, there’s a help wanted sign."

He also pointed to several other items he would like to see make progress, including tort reform, intellectual property reform and others.

“At the end of the day, you will see a few more things get through the process, and hopefully some are big ticket items,” he said. “But when those people who are against the bills know that the hammer comes down on May 13 at 6 p.m., it doesn’t take long for legislation to die. Right now, we have to focus on the budget and the redistricting map.”

Schatz’s leadership has led to the passage of several business-community priorities, and ideally, the conclusion of the 2022 legislative will bring the same.

For updated information on progress in the state legislature, as well as federal and local updates, check out the most recent edition of our Advocacy in Action e-newsletter.

Thank you to Presenting Sponsor Spencer Fane, LLP and Seasonal Sponsor Greater Springfield Board of Realtors.