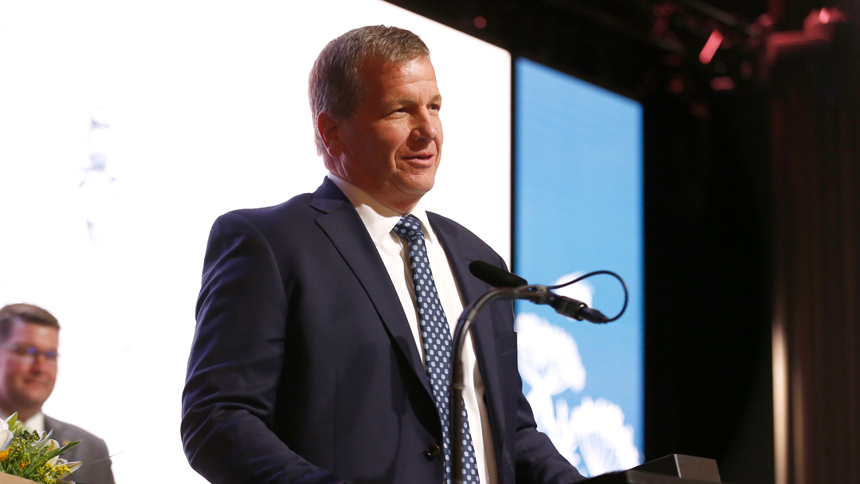 A strong connection to the Springfield community and a desire to give back are among the defining characteristics of Joseph W. Turner. Those qualities, along with a lifetime of accomplishments, were celebrated on March 22 as the Springfield Area Chamber of Commerce presented Turner with the 2022 Springfieldian Award.

The announcement was the culmination of the Chamber’s Annual Meeting at the Oasis Hotel & Convention Center. The Springfieldian is the Chamber’s most coveted honor, given each year to an individual who exemplifies outstanding community service, excellence in his or her field and dedication to improving the quality of life for Springfield and its citizens.

A Springfield native and Glendale High School graduate, Turner played football at Drake University, where he earned a bachelor’s degree in business administration. After passing the CPA exam, he then earned his juris doctorate from University of Missouri-Columbia School of Law in 1989. He went on to practice law at Stinson, Mag and Fizzell in Kansas City before joining Great Southern Bank.

During his tenure as president and CEO, Great Southern has expanded dramatically, growing from a bank with $965 million in assets, serving customers primarily in southwest Missouri, to a $5.4 billion institution serving 12 states. The company now employs more than 1,100 associates and operates 93 banking centers in Missouri, Arkansas, Iowa, Kansas, Minnesota and Nebraska and commercial loan offices in Atlanta, Chicago, Denver, Dallas, Omaha, Nebraska, Phoenix and Tulsa, Oklahoma. The bank has also received numerous accolades, including being named the No. 1 bank in the U.S. and the No. 2 bank overall in Forbes magazine’s 2021 list of the World’s Best Banks.

“He has quietly and humbly built an incredible organization here in our community,” said friend and colleague Brian Fogle, president of the Community Foundation of the Ozarks.

Joe and his family have made their mark on the Chamber as well; both he and his father, Bill, have both been board members and chairmen - and both have now received the Springfieldian honor as well.

“Joe Turner is a low-profile, quiet, homegrown CEO,” said friend and former Springfield City Manager Tom Finnie, “who has made a major impact on our community – and on thousands of people in our community.”

To learn more about this year's Springfieldian, check out the video below!