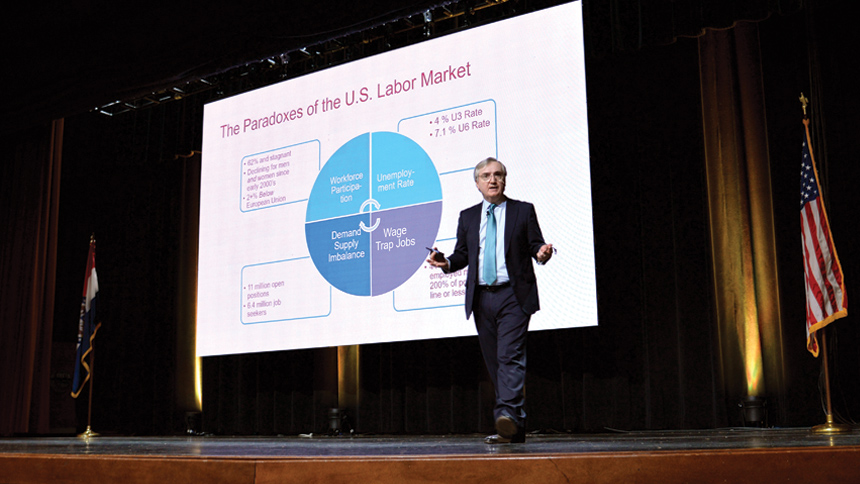 Employers are having more difficulty than at any time in recent history finding the people to fill open or newly created jobs – and according to Harvard Business School research, that difficulty is being inadvertently exacerbated by employers themselves.

Joseph Fuller, Harvard Business School (HBS) professor and visiting fellow at the American Enterprise Institute, shared those insights and numerous others to a captivated audience of nearly 450 local business leaders during the SBDC’s 2022 Annual Meeting on March 3.

Fuller oversees ongoing research about “Managing the Future of Work,” and he presented findings at the event from a recent paper connected with this project: “Hidden Workers, Untapped Talent.”

He said that it is indeed more difficult to compete for workers in the current environment for several reasons, from demographics – the number of young people entering the workforce cannot keep up with the retirement of the baby boomer generation – to the effects of the pandemic, which forced some out of the workforce for a variety of reasons and sped up the exit of those near traditional retirement age.

All these issues have led to historically low unemployment rates, which are good for job seekers but create difficulty for businesses – nationally there are roughly 11 million U.S. job openings, with fewer than 7 million people are classified as unemployed.

But Fuller noted that the traditional unemployment rate is misleading, as it leaves a significant portion of the population, which he refers to as “hidden workers.” These include people caring for children or the elderly, veterans, immigrants, people with physical or mental health or development challenges, those previously incarcerated, and numerous other groups.

This is no small group, either. The Harvard study estimates that more than 27 million people fall into this hidden worker classification.

Why are these workers being left out? Fuller says it comes down, in part, to the systems that most companies use to search for talent. Resource management systems and automated job application processes are built on algorithms that are designed to make the process easier for the employer by filtering out employees that aren’t a good fit for job openings.

But Fuller says most of these systems are too good at their job. In other words, they filter out too many people – the equivalent of performing surgery with a chain saw instead of a scalpel.

The issue is exacerbated by often outdated job descriptions, which job search AI relies on to perform its filtering. “It’s understandable; when desperately looking to fill a job opening, you don’t want to sit down to a blank Word document, stare at the blinking cursor and say, ‘It’s time to do some creative writing,’” Fuller said.

What can companies do? Fuller pointed to two keys. One is updating job descriptions and the algorithms that job search software uses to filter out candidates.

But, just as importantly, employers need to expand their horizons in terms of who they reach for job openings. This could mean investing in programs or partnerships that connect with those who are traditionally underrepresented – for example, people with physical or mental disabilities or people with a criminal record. Fuller says it’s an investment worth making.

“It’s more affordable than constantly training new employees and competing with each other for the same pool of applicants,” he said.

You can also download Professor Fuller's paper on "Building from the Bottom Up," and you can sign up for the Managing the Future of Work e-newsletter for up-to-date information!

A Look at Economic Development Activity

To kick off the 2022 SBDC Annual Meeting, Chamber President Matt Morrow offered a recap of recent economic development activity in our region. He talked about the progress we have made in attracting new business development and expansion.

He also referred to the strength of our region’s collaboration and how that helps in the competition for new and expanding businesses – specifically the collaboration between the 10 counties in the Springfield Regional Economic Partnership.

Much of the information is contained in the 2020 & 2021 Economic & Workforce Development Impact Recap, which attendees received at the event. Click here to download your copy!