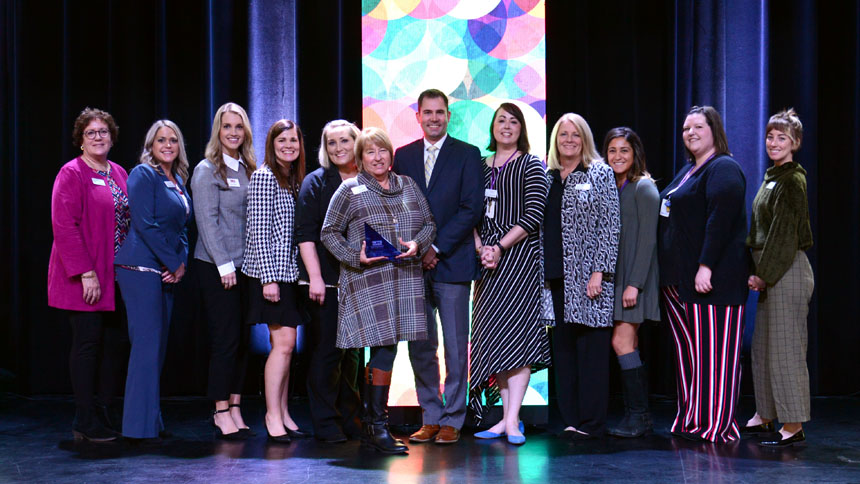 During its annual event on November 10, the Chamber announced Harmony House as the recipient of the 2021 W. Curtis Strube Small Business Award.

Started by a concerned group of community members in 1976, Harmony House has been providing shelter and support services to domestic violence survivors ever since and has impacted the lives of more than 20,000 women, men and children who have been served to date.

The center was originally incorporated as the Family Violence Center and began as a grassroots all-volunteer organization with the first survivors being sheltered in volunteers’ homes and area hotels, then in rented shelter homes. Through donations and community support, the organization has grown over the years; its name was changed to Harmony House in 2010, and its new facility that opened in 2017 makes it the largest domestic violence shelter in Missouri.

“It’s impressive how Harmony House has incorporated business best practices to ensure best-in-class service to its clients,” said Chamber President Matt Morrow. “And, like many in our business community, they have focused on creating a strong workplace culture and being an employer of choice to attract and retain talent.”

The Small Business Award is named for Dr. W. Curtis Strube, late director of the Breech School of Business Administration at Drury University, who was a dedicated advocate of small business and founder of the Chamber’s Small Business Council.

This award, presented by the Chamber’s Small Business Council since 1992, celebrates the success of the organization’s small business members and recognizes the important role small businesses and entrepreneurs play in the local economy. More than 80 percent of Chamber members have 50 or fewer employees.