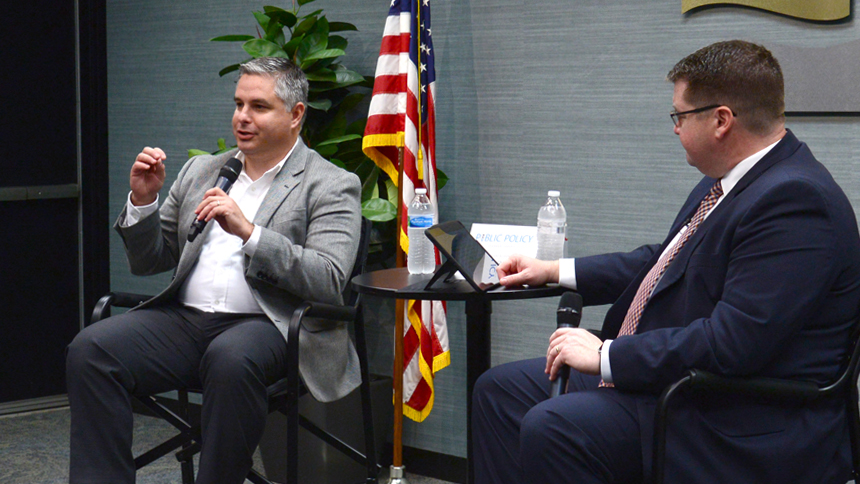 Rob Dixon, director of the Missouri Department of Economic Development (DED), returned to Springfield to speak to Chamber members for the final time in his current leadership role with the state during the second installment of the 2021 Public Policy Speaker Series on October 15.

Dixon recently announced plans to step down as director, effective October 22, to serve as director of community and economic development at Ameren Missouri. Dixon has served as president/CEO of the Missouri Community College Association and in multiple roles at the Springfield Chamber.

When Dixon began leading DED in 2017, he envisioned a fundamental reset in the way the state approached workforce and economic development, and infrastructure.  Because of his experience working with the state, he had a unique vantage point to see where improvements could be made.  He noted that at that time, DED did not have a clear strategic purpose and was the largest state economic development department but, in comparison to peer states, one of the least effective.

“The whole premise of what we were trying to accomplish was to get laser-focused on core principles of economic development, specifically since we’d fallen behind as a state in this area,” Dixon said.

Efforts included further consolidation and refocusing the department to better support local development. Throughout his tenure, Dixon built on this mission by implementing several reforms, including structural changes and new programs like Missouri’s Best in Midwest initiative and Missouri One Start. He’s also been a major player in bringing key economic development projects to the state, like the General Motors assembly center in Wentzville.

These changes did not come without also prioritizing and implementing collaboration with different partners at the state and local levels, and the work isn’t done.

Dixon discussed the different challenges and priorities faced by every department during the pandemic, and how a focus on collaboration was the key to their response efforts.

“The most important factor that led us to have any success was establishing department relationship prior to the pandemic,” Dixon said. “This takes intentionality from leaders.”

Dixon explained that Governor Parson took a collaborative approach to COVID-19 response efforts, adding that this removal of specific agency boundaries to find the best solutions was one of the accomplishments he was proudest to be part of.

He noted that some pandemic-related changes are still in place and a continued focus on improving the user experience and agency efficiency should be a government priority.

Among the challenges Dixon discussed, workforce was at the top of the list. The worker shortage is an issue for nearly every employer, and Dixon said it will continue to impact our state’s ability to compete.

“Workforce is what is going to let your community or state beat out your competitors,” he said.

Dixon said his view on leadership has evolved. While organization leaders must keep an eye on the big picture, he said it’s necessary to switch between strategic and tactical involvement as needed. And while he hopes the next director will consider this focus, he said they should not feel tied to his specific processes, as needs will evolve in the future.

“We need to start thinking differently about the way things are currently done,” Dixon said. “We need to think about automation, strategize about talent attraction, training and retention efforts, and consider this challenge from a public policy perspective.”

While Dixon knows there is unfinished business, he believes our state’s people are its biggest asset, and figuring out how to not let each other get in the way of progress is our biggest opportunity.

“I love this state, I love the people in it, and that is something we should be proud of,” Dixon said.