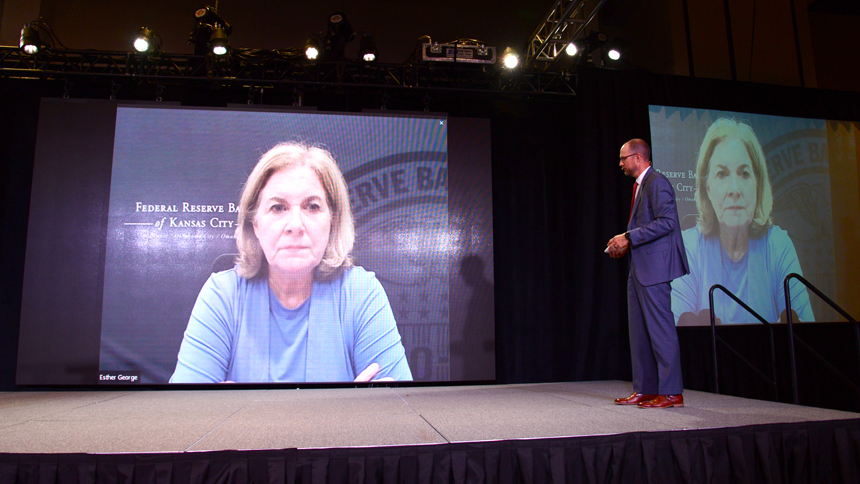 Experts predict that the economy, both nationally and in our region, will continue to rebound from the effects of the pandemic, though uncertainty also remains – related to both inflation and the virus itself.

Two of those experts were the featured speakers at the SBDC’s Economic Outlook event on August 18 at the DoubleTree Hotel’s Glendalough Conference Center. More than 300 business and community leaders gathered for the annual event, which also featured a presentation from Chamber Senior Vice President for Economic Development Ryan Mooney with an update on economic development projects and the region’s continued efforts to find workers.

The two featured speakers, who both joined the event remotely due to travel restrictions, offered perspectives on both the national economy and our regional outlook. Esther George, president of the Federal Reserve Bank of Kansas City, brought the national outlook. She said employment levels have continued to rebound strongly since the unemployment peaks of late spring 2020. The national unemployment rate dropped to 5.4% in July, well below its double-digit peaks in April and May of last year.

“Seeing these steady job gains is important,” she told the attendees. “It’s not clear that we will go back to the unemployment rate that we saw in early 2020, which was historically low – the pandemic has upended a lot of the ways people work.”

President George said that current supply shortages should begin to even themselves out in the coming months, although the uncertainty related to new variants of COVID-19 may convince some consumers to delay their return to more service-oriented purchases (such as travel) and continue ordering goods for use in the home, which are already in short supply to unprecedented demand in recent months.

Those shortages, she added, have fueled recent inflation, though that is expected to moderate as well.

“What we see today is an economy that shows clear signs of demand running ahead of supply and pushing up inflation,” she said. “My expectation is we could well see growth step down a bit, but it’s going to remain robust over the next year or so.”

The other featured speaker at the event is a familiar face to those who have attended or viewed previous Economic Outlook events: Charles Gascon, regional economist and senior coordinator with the Federal Reserve Bank of St. Louis.

Gascon focused on the economic outlook for the Springfield region, and he said he expects unemployment to continue to drop in our area. The local unemployment rate in June for the Springfield MSA was 4%, well below the state’s 5.1% level. He expects that local rate will fall to just over 3% by the end of the year. Gascon added that job growth has been strong and should remain that way through the rest of 2021, with real GDP growth for Springfield being well above the state and national levels.

That outlook ties into the report from Mooney at the beginning of the event. He said the volume of leads – for potential business relocation or new business expansion – is on record pace, having already surpassed the total for all of 2020 and nearly matching the full-year total from 2019.

He also said the number of total projects (leads that have a solid chance of being converted to wins) is on pace to hit its peak in 2018, and the number of company site visits to Springfield has surpassed the total from each of the previous three years.

However, Mooney noted, two issues could act as impediments for potential wins: a lack of development-ready real estate, and the continued shortage of workers to fill new jobs.

He pointed to three-year population growth figures for our region that, while above the national average, are well below the rates of the top 10 percent of markets in the country. That labor shortage has led to continued upward pressure on wages, which have increased by nearly 14 percent in the last three years.

All these issues mean that the continued focus on placemaking and community improvement will be even more important moving forward.

“We’ve made a commitment as a community to invest more heavily in quality of place, in the hopes that we can attract and retain more talent for the Springfield economy,” he said. “If we have more people here, it will help companies fill the jobs they want to create and facilitate their growth.”