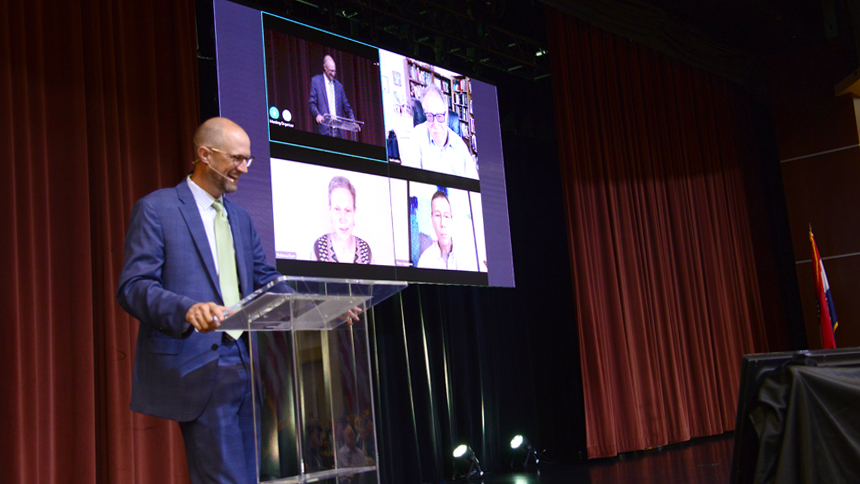 The Springfield Business Development Corporation – the economic development arm of the Chamber – held its first major in-person event of 2021, the SBDC Annual Meeting, on June 16 at the Oasis Convention Center.

Apparently, people were ready once again to meet in person, as a near-record crowd of 450 people attended the event to hear a recap of economic development efforts in the last year. Attendees also got the chance to hear a panel discussion with the last three keynote speakers from this event: demographics & geography expert Joel Kotkin, author and community development consultant Peter Kageyama, and futurist and economist Rebecca Ryan.

Growth amidst uncertainty
The program began with an update on activity in our region from Ryan Mooney, the Chamber’s senior vice president of economic development. He noted that despite the pandemic-related business restrictions in place across the country and the overall uncertainty, confidence in the Springfield market among businesses did not wane in 2020.

“Despite the pandemic, the last year was a great one for economic development,” Mooney said. “We saw companies time and time again continue their projects in Springfield and continue their growth in our community.”

And interest in new expansion projects – both from companies already in our market and from those looking to locate here – has only accelerated as the country emerges from the deepest effects of the pandemic. But, Mooney noted, meeting the demand may be difficult for two reasons: available real estate and available workforce.

Development-ready property has been in short supply for several years, but with big projects like Amazon and John Deere eating into available stock the issue is even more critical now. The area also has a shortage of available employees, due to both demographic issues affecting the entire country and to population growth rates locally that are only slightly above the national average.

But, Mooney added, the community’s renewed focus on placemaking and long-term planning could be key to improving our population rates. He pointed to a wealth of exciting projects and initiatives around the city, from the Forward SGF long-range planning program to the Grant Avenue Parkway project and Renew Jordan Creek effort, as well as the city’s decision to hire Tim Rosenbury as its first Director of Quality of Place Initiatives.

“The future for us as a community is bright – there are ways you can engage on your own to help make Springfield a better place to live and work, and I would encourage you to do that,” he said. “Together I think we can keep our foot on the pedal and continue to see the good things happening in Springfield come to fruition.”

Key(note) observations
The main portion of the program was the keynote panel. It marked the first time that Kageyama, Kotkin and Ryan have ever appeared together on a panel at the same event, even if they were there virtually.

Kotkin noted that the pandemic didn’t necessarily change the trends that were happening across the country, whether it be population movement patterns or the trend for more companies to have their employees dispersed and working remotely. But the pandemic did dramatically accelerate the trends.

He also said Springfield’s efforts to be more welcoming to people from around the world will pay off in helping address workforce shortages; he noted that the foreign-born population in our region has increased by 25% in recent years. “There is still a long way to go there, but being able to bring in more people both from around this country and from abroad is going to be key,” he said.

Kageyama, who talked about the impact of writing “love notes” to your city when he visited in 2019, said he was impressed by Springfield’s focus on making investments that have an emotional impact on citizens. Cities that take into account the emotional impact of infrastructure investments on their residents, he said, will have an advantage moving forward.

Ryan, meanwhile, said she has been watching the acceleration of divisions in our country – divisions that are supercharged by the political environment and artificially inflated by social media.

“My big question right now is how do we live together? And can this next phase of American life be about reconciling?” she said. “I’m really interested to see how we balance the in groups and out groups that social media has helped to amplify with humans’ superpower, which is cooperation.”