Reflecting on a lifetime of education leadership 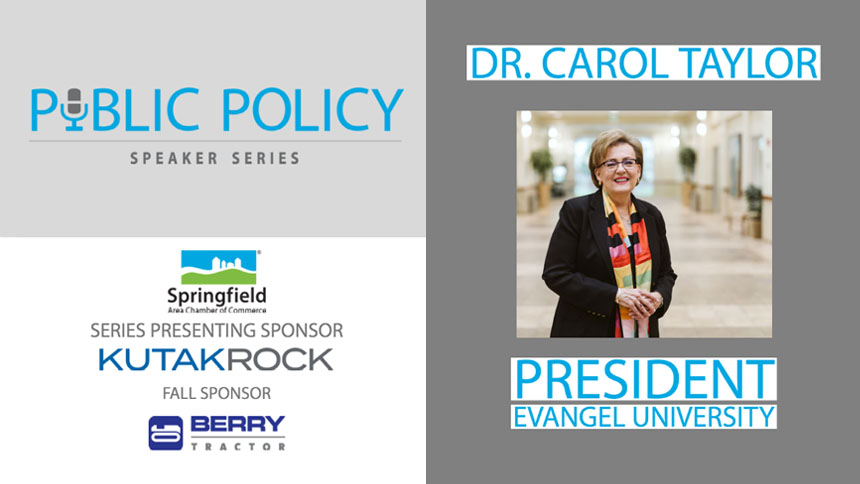 Anyone who knows Dr. Carol Taylor knows that one of her favorite mantras, especially lately, has been this: “Blessed are the flexible.”

One look back at Taylor’s career in education shows she has taken that advice to heart in her own career, as she discussed during the second installment of the Chamber’s 2020 Public Policy Speaker Series on October 27.

The virtual interview with Chamber President Matt Morrow covered a wide range of topics, from the highlights of Taylor’s 25-year career in higher education to leadership during the coronavirus pandemic and how she works to improve her school and her community.

Dr. Taylor was named president of Evangel in 2013 and is an alumna of both Evangel and Assemblies of God Theological Seminary. She has spent her life in a variety of key leadership roles in public, private and Christian education.

She told those attending the virtual event about what called her to a career in education; she noted that it was more of a gradual realization of her passion for the field, combined with the fact that students seem to respond well to her leadership style.

“Teachers can have such an impact on the lives of their students, and that idea resonated with me,” Taylor said. “I wanted to make that impact in someone else’s life. I guess my calling just found me.”

Of course, the onset of the coronavirus this spring upended college life at Evangel, as it did on every college campus. Dr. Taylor called it the most significant challenge she has had to navigate in her career, as it has been for any college president with whom she has spoken.

But her well-established leadership style has served her well throughout the crisis, as it has over her career. It’s built on bringing people together despite differences and always having a vision backed by a plan.

“Start with a vision so you know where you’re going,” she said. “Plans don’t inspire people – you need a vision to inspire first, and then you need a plan to get there.” She has also made a point to put service first, noting that the most successful leaders are those who know they are there to serve the people of their organization.

As for her post-retirement plans, Taylor said at the moment, she doesn’t have any. She has never taken an actual sabbatical in her career, so she plans to take some time to herself after retiring without setting any expectations. But she did say she plans to stay in Springfield, a community she has committed to improving.

“I’ve lived in many different places, but Springfield is really special out of all the places I’ve lived,” she said. “There are good people committed to doing good things to help the community. We need to contribute to help make our communities better – it’s hard to know what the community is like for your graduates if you aren’t involved in it yourself.”