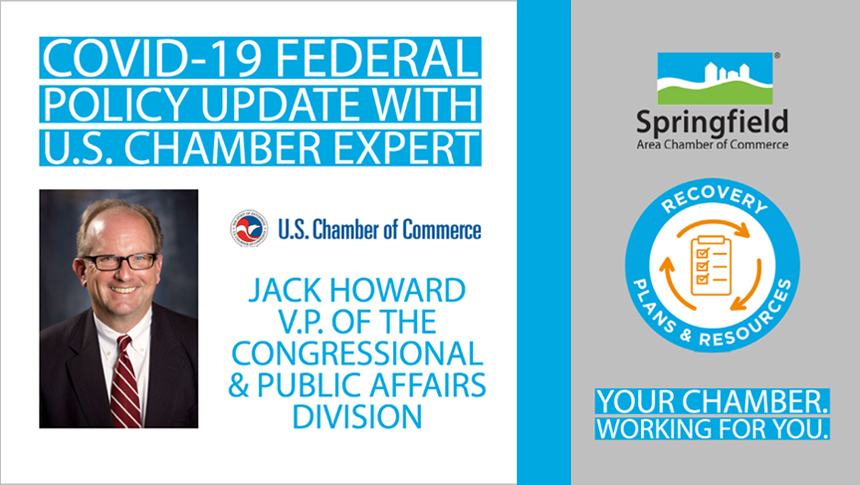 On September 16, Chamber members received an update from Jack Howard, senior vice president of the Congressional and Public Affairs Division at the U.S. Chamber of Commerce. He provided insight into opportunities and potential roadblocks to progress to federal coronavirus relief.

According to Howard, the current priority for federal lawmakers is keeping the government open, as the end of the fiscal year on September 30 is rapidly approaching.

Howard said it’s likely that Congress will pass a continuation resolution to continue current funding levels into fiscal 2021. The length of that extension is still unknown, and the November election will likely impact the timeline.

There are also many unknowns surrounding the next phase of potential COVID-19 relief.  Howard described current negotiations as being in a “state of suspended animation,” with stalemates between Senate Republicans and House Democrats prompting little likelihood of additional action being taken on further assistance to individuals and businesses impacted by the pandemic.

“There is a lot more we don’t know than we do know in the near future,” Howard said.

Proposals in both the House and Senate have made little progress, and there is decreasing optimism that that serious negotiations will begin soon between Congress and the White House.

A significant challenge is the broad range of overall funding.  The Senate proposal carried a price tag of around $500 billion, with the House version totally approximately to $3 trillion. Additional sticking points include the rate federal unemployment compensation, additional funding for state and local governments and the inclusion of liability protections for business.

Many pandemic-related assistance programs have already expired amid the lack of additional legislation, including the application period for the Paycheck Protection Program (PPP) and supplemental unemployment benefits. Howard stated it’s unlikely another COVID-related relief bill will be passed prior to the November election, and maybe even before the end of 2020.

Efforts have been made by several House members through the newly formed bipartisan Problem Solvers Caucus to find a compromise between the House and Senate proposals.

Howard said the U.S. Chamber has launched their “Cost of Inaction” campaign to remind lawmakers that their failure to act has real-world consequences for people and businesses who are suffering.

They continue to urge federal action on several key areas, including COVID-related liability protections, the reauthorization of PPP loans, and overall additional assistance for businesses and individuals as many continue to struggle through COVID-19 recovery.