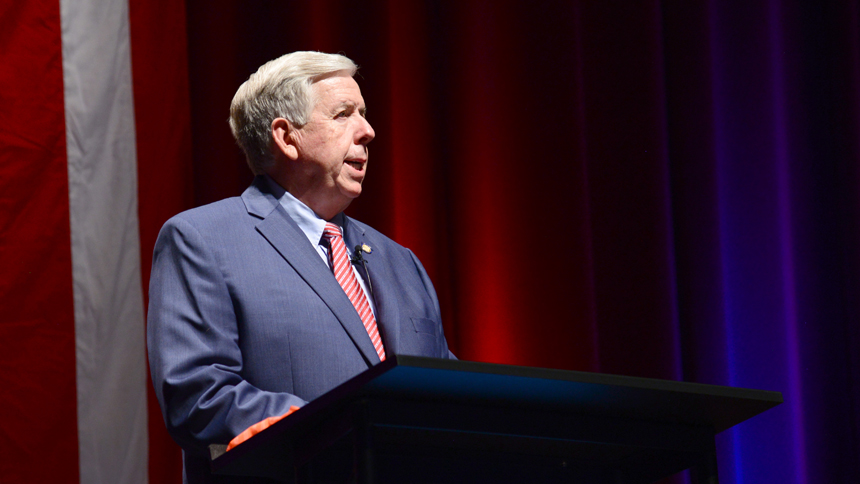 When Governor Mike Parson visited Springfield on July 29 to deliver the keynote message at the Chamber’s third annual State of the State, the event – like so many others right now – looked and felt different than originally planned.

The event at Juanita K. Hammons Hall for the Performing Arts was changed to a virtual streaming format out of an abundance of caution for the safety of attendees and the community.

Chamber Board Chairman Robin Robeson addressed the ongoing pandemic, and the community’s resilience, during her remarks.

“I know everyone listening cares deeply about our state and about our physical, mental, emotional, and economic health – all of which are inextricably linked,” Robeson said. “If we remain committed to collaboration, partnership, and innovation, I know that we can come out of this stronger.”

The pandemic was the focus of much of the governor’s presentation as well. Parson noted that, while it was impossible to predict a crisis of this magnitude sweeping the globe for much of the year, the state’s fiscal responsibility in 2019 put Missouri in a somewhat better position to prepare.

“Last year, we left $100 million on the bottom line to deal with unexpected shortfalls or revenue declines,” Parson told those watching online. “Knowing what we have been through, we are so glad we did.”

Parson said the state’s Show Me Recovery Plan—built on increasing the four pillars of testing, personal protective equipment, hospital capacity and data availability—have allowed the state to handle rising numbers of cases affecting every state in the nation.

And while the state’s historically robust economy before the pandemic has taken a major hit, Parson said the economy is showing signs of recovery.

Missouri’s June unemployment rate dropped to 7.9 percent, down from 10.1 percent in May, and more than a third of the jobs lost in March and April were recovered in May and June.

“We are on the right track, and we will continue to do everything we can to continue helping Missouri families and businesses recover from this crisis,” he said.

He also pointed to numerous project announcements across the state in recent weeks that will add thousands of new jobs and millions in new private investment into the local economy, as well as the passage of tort reform legislation and new license reciprocity rules in the regular legislative session. “These are just a few examples showing that Missouri remains a destination for business investment and expansion,” he said.

The governor was joined in the program by Missouri State University President Clif Smart on behalf of the Springfield Metro Partnership, which offered its thanks to the area’s legislative delegation for their service this year.

Board Chairman Robin Robeson also thanked the business community for their engagement during the 2020 legislative session.

“Your feedback to the Governor, your outreach to lawmakers, and your presence in Jefferson City all made an impact,” Robeson said.

Chamber President Matt Morrow also talked about the ways the Chamber has shifted its focus to helping members navigate the crisis. He also introduced a video of several of our members speaking for themselves about how the Chamber has helped them through this historically difficult time.

“We have an incredible business community,” Morrow said. “We continue to be struck by your innovation, resilience and ability to adapt. We appreciate all you do to make Springfield the great community it is.”

Watch the video below to hear from our members directly!