ATHENA: An afternoon of gratitude and empowering messages 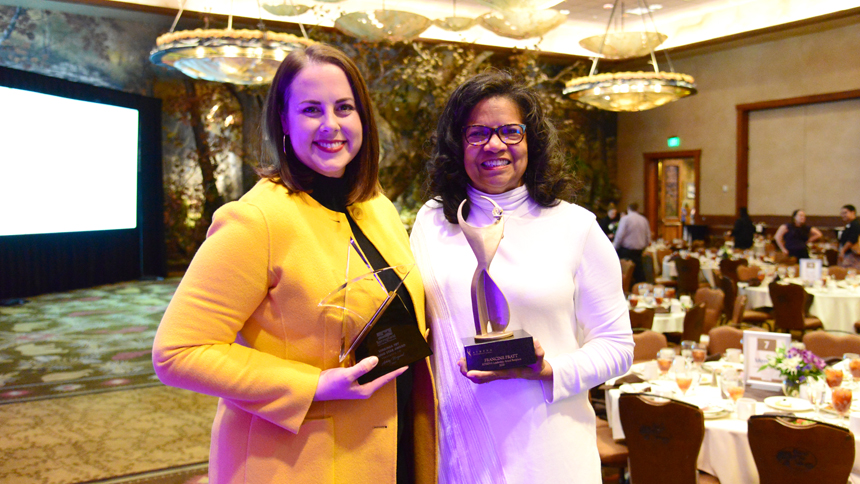 When the Chamber handed out the third annual ATHENA Award on March 4, honoree Francine Pratt was quick to tell the sold-out crowd of more than 400 that being in front of large groups is not her first choice.

“I hope I don’t offend anyone, but it is my calling to do what I do – and those who know me know I prefer being behind the scenes,” she told the group assembled at White River Conference Center.

But it’s precisely that attitude of selflessness and desire to help others first that made her the choice of the independent panel of judges for the ATHENA Award, which is designed to honor someone who meets three specific criteria:

Pratt, the director of Prosper Springfield, meets all of those criteria and more. Through that initiative, she is working to increase the area’s post-secondary attainment level and reduce the area’s poverty rate. She also has a long career helping others, including serving as a board member for the Missouri College Access Network and a member of the Missouri Department of Higher Education and Workforce Development Equity Project.

Her focus on others was on display in her acceptance speech as well, where she noted that her passion is for sharing what she has been given with others – and that the award really belongs to the Springfield community.

A new award
This year was also the first for a new honor: the Virginia Fry Rising Star Award. The award, given to a young professional woman who is already making a difference in the community for herself and other women, is named for community visionary Virginia Fry – a woman known for her willingness to guide and mentor others through their professional and personal journey.

The first recipient of the award, attorney Ashley Norgard, knows Fry’s legacy personally. Norgard was recruited to Springfield by Fry in 2013 and the two worked together for nearly six years, with Fry serving as her mentor.

In her comments accepting her award, Norgard dedicated the award to its namesake. She asked for a show of hands of those who had been personally mentored or had their lives positively affected by Fry’s influence, which solicited dozens of responses.

And she recalled her tearful reaction when Chamber President Matt Morrow took her and Pratt to lunch to let them know they were going to be honored. She said she immediately started to cry – at which point Matt told her that he needed to take a picture to post on social media.

“I could hear Virginia laughing,” she said. “She was saying, ‘Put on some lipstick and get to work!’”

Supporting other women
Between handing out the two awards, guests heard a moving keynote speech from Christa Moss, judicial law clerk in the U.S. District Court for the Western District of Missouri.

Moss, who has professional and personal connections with both honorees, talked about the strong influences that her mother – and the experience of being a mother – have had on her life, as well as how her strong faith has allowed her to believe in things beyond herself.

But she ended by talking about the importance of women supporting each other – and how this year’s honorees embody those traits.

“Behind every successful woman, there is a tribe of successful women who have her back,” she said. “Empowering women doesn’t come from selfishness. It comes from selflessness. Is there any better way to describe Ashley and Francine than selfless? They would drop everything they’re doing to support another woman, to take up a new project or cause, simply because they are a part of our tribe.”

Click this link to see a photo gallery from the day's event!

A special thank you to the sponsors of our event: