Rep. Steve Lynch: Positivity and support for the military 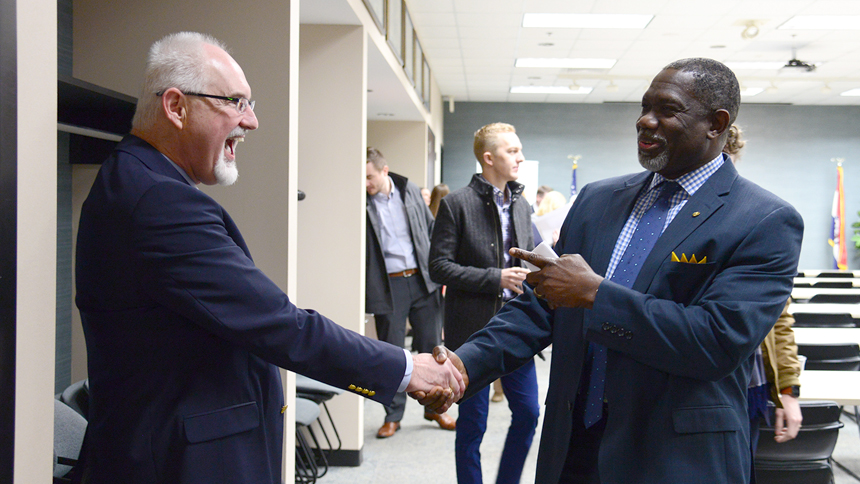 The term “upbeat” might be an understatement when describing State Rep. Steve Lynch, which he demonstrated at the Feb. 28 meeting of the Chamber’s Governmental Relations Committee.

Rep. Lynch, who represents District 122, gave Chamber members a glimpse into his lengthy career in business and the Missouri House. This is his final two-year term in the House and his fourth year serving as the House Majority Whip, a leadership position he is especially proud of because it requires being elected by his peers.

Before serving in this office, he spent 35 years as the third-generation owner of his family's furniture business.  Rep. Lynch has always had a passion for service, and his interest in politics was sparked by three years spent as president of the Waynesville-St. Robert Chamber of Commerce.

"I had the intention to do everything and be everywhere, because it was always my desire to make a difference," Rep. Lynch said. “Serving in the Chamber can change your life, and it made me want to serve full time.”

Lynch currently represents Missouri’s smallest outstate district, since Fort Leonard Wood resides in his district. But most of the military members on base do not change their residence to Missouri because they’re constantly moving – ultimately, they make up a 1/3 of his constituents, and most cannot vote for him. However, he is extremely proud to not only represent them, but advocate for them.

“It is my passion and it is my heart,” Rep. Lynch said.

This session, he is sponsoring HB 1511, a licensing reciprocity bill for military spouses. This bill is a priority for the Governor’s office and even the Pentagon, as quality of life has become an important factor in drawing military members to Missouri, which includes making it easier for their spouses to enter the workforce.

“This bill sends a strong message that ‘we understand what you go through, we appreciate it, and we support you,’” Lynch said.

“People complain all the time about coming to the Fort because we don't have that quality of life aspect, but I point right to you all,” Lynch said. “Springfield has the culture that people are looking for, and you know how to treat military members right and make them feel at home.”

He bragged on Springfield and our willingness to embrace and support both active military members and veterans. He praised Mayor Ken McClure, who was also in attendance, on the city’s exceptional Home for the Holidays event in December and the appreciation from Fort leadership.

He also expressed gratitude for the constant business perspective our volunteer leaders and staff bring to the Capitol.

Furthermore, Rep. Lynch explained the military and defense industry is one of the largest in the state, accounting for 5% of the gross state product and 7% of Missouri’s workforce. He said the Fort alone has a nearly $3 billion economic impact on our state.

He also touched on the Soldier for Life program, which allows military members who are planning to retire to work at a business for the last six months of their active duty, at no cost to the business.

“We constantly hear that people can’t find qualified workers, and here is this great pool of applicants about an hour down the road,” he said. “We want to keep veterans in our state and support them any way we can.”