The Network talks about the importance of inclusion 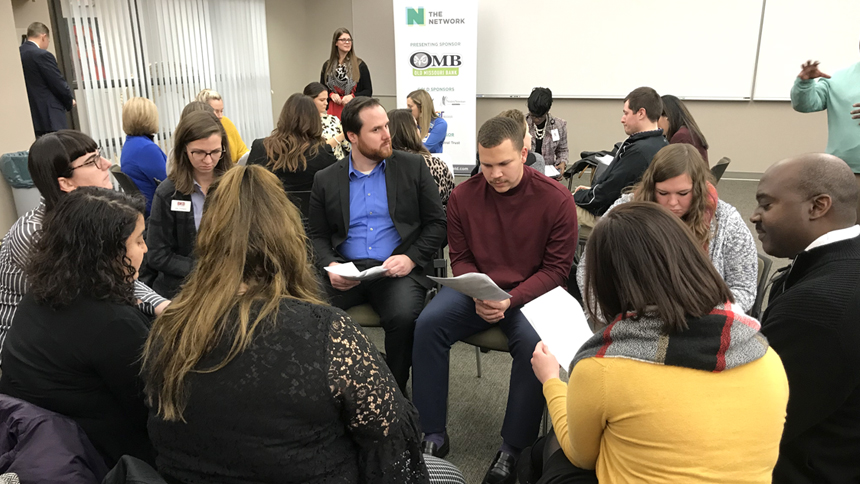 Inclusion and diversity are important topics to the health of an organization or a community, but they can also be difficult subjects if they’re not approached the right way.

Derrick Nelson and Shannon O’Heron are aware of the potential pitfalls. They lead the inclusion and diversity efforts for Commerce Bank – Nelson is the corporate inclusion & diversity manager, while O’Heron is Commerce’s inclusion, diversity & talent development consultant – and they presented their perspectives and knowledge to The Network at the last Access to the Issues event of 2019 on December 10 at the efactory.

Nelson said that after getting his master’s degree in HR, the new CEO of his previous employer – a man of Hispanic descent – was concerned about the lack of diversity among key decision makers.

“He looked around the table and all he saw was white men looking back at him, and he wondered what voices were missing from the conversation,” Nelson said. His mentor, who was the company’s HR director, suggested him as an ideal candidate to lead inclusion and diversity efforts.

A few years later, when he joined Commerce Bank, the institution created a full-time position for his efforts, helping him avoid what he called “compassion fatigue.”

O’Heron has a personal connection to the inclusion mission. She is white, but her husband is of Mexican descent, and she saw firsthand the privilege she had.

“I saw that having the same conversation with the same person, he did not get that same treatment, he didn’t get to leave the space feeling the same way I did,” she said. “That happens all the time, and until I could see that and have that dialogue, I didn’t realize that this was an opportunity. That really became my personal passion. I can’t do everything, but I can be an ally and lend my voice to the people who don’t get to be in the space in the same way that I do.”

Inclusion and diversity efforts are also a personal passion for Nelson. “As a person of color working in a large organization, I would see unfair treatment of people of color and women, and I knew there had to be a better way to make an impact,” he said.

Nelson saw his wife face retaliation from her bosses when she questioned why she was being paid less than her peers for the same job. He encouraged her to leave the job, which she did. And he gave the same advice to those in attendance.

“I’m not encouraging anyone to quit their jobs tomorrow, but I am asking you to look at your organization and ask if they value I&D efforts. And if not, think about taking your talents elsewhere,” Nelson said. “Have the courage to have these tough conversations, in the workplace or with your friends. Without them, the needle will never move, and people will be left behind.”

The YPs then broke into small groups for case studies, looking at news articles about issues facing various workplaces and discussing ideas for how to tackle them. The groups had thoughtful discussions and shared their thoughts on everything from hiring practices to use of gender pronouns in the workplace.

Nelson left the group with a thought about the importance of having other people working on inclusion and diversity throughout the community.

“There are days that I go to bed thinking, ‘I didn’t do as much as I could have today,’” he said. “But it gives me strength to know that this journey and this work is not mine alone. And while we may not get everything done that we want to get done in our lifetime, it’s nice to know that there are people in this space that are planting the seeds that will help change the world.”