Building on relationships and experience in the Missouri Senate 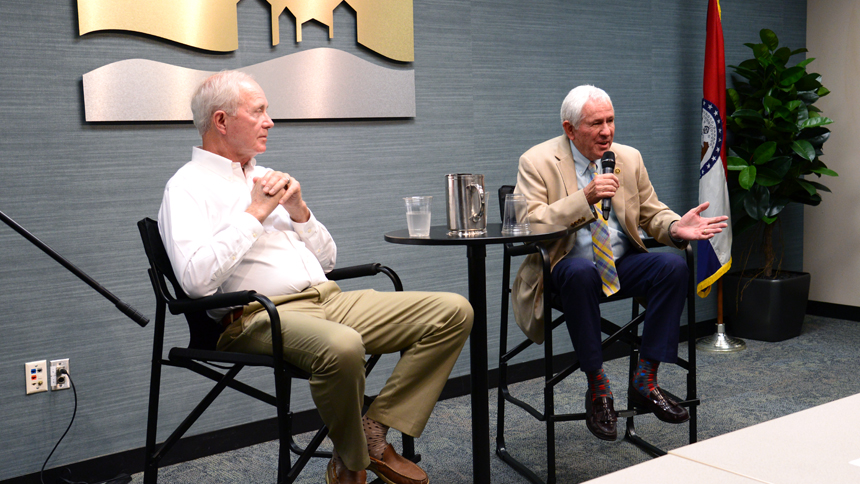 Mike Cunningham and David Sater have spent the last seven years in the Missouri Senate developing relationships and knowledge – both of which are more important now than ever when it comes to successfully making progress in governing.

The two senators visited the Chamber August 28 for the latest meeting of the Governmental Relations Committee to offer their perspective on the most recent legislative session and possible priorities for 2020.

They both said everything starts with making relationships – with fellow legislators and with other decision makers – and they praised the business focus of the governor and lieutenant governor.

“We have a great pro-business governor, and the same goes for Lt. Gov. Kehoe,” Cunningham said. “We have common sense in those offices.”

The two senators were highly involved in the state’s budgetary decision-making for the year. They both serve on the Senate’s Appropriations Committee and Fiscal Oversight Committee – on the latter, Cunningham served as chairman, while Sater was vice-chair.

Sater said one area he particularly proud of in the 2019 session was the legislature’s focus on education funding, including fully funding the education formula for K-12 schools and increasing money for school transportation. “Every day the school buses in McDonald County drive 3,000 miles,” he said. “We need to do a better job supporting that work.”

He also pointed to successes in funding for higher education, including more money for Missouri State University and funding for the Center for Advanced Manufacturing and Technology at Ozarks Technical Community College.

Cunningham, meanwhile, pointed to work completed in the infrastructure arena, including a $300 million bonding bill that will fund repair and replacement of more than 200 bridges statewide.

But both senators noted that while the bonding bill is a big win, a long-term funding solution for roads is still necessary. Sater pointed to the idea of setting aside more general revenue for roads, while Cunningham believes the state’s 17-cent-per-gallon gas tax will need to be revisited eventually.

“Our gas tax is the lowest in the nation,” he said. “We have to do something. We can’t just keep bonding – we need to keep our bonding debt low.”

The state’s successes in education and infrastructure wouldn’t have been possible without leadership from experienced legislators who have built strong working relationships throughout the Capitol – a point emphasized by a fellow legislator in attendance from the state House of Representatives.

“Many of these bills made it through in the Senate because of the work of these two senators and some of their colleagues,” said Rep. John Black, R-Marshfield. “They have been essential to the success we’ve had in our area.”