The Network CEO Series stays all in the family 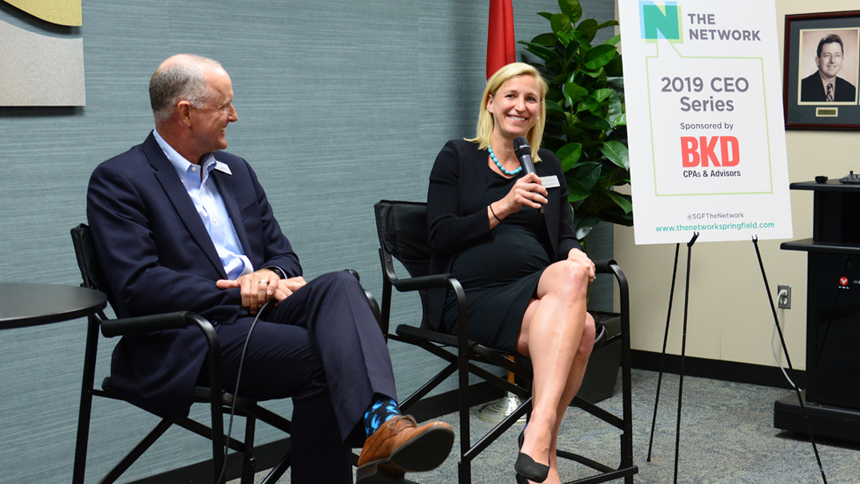 They’re both members of the third generation of the Griesemer family to run what started as the Joseph J. Griesemer Quarry in 1946. It has since grown into a group of multiple distinct companies with Springfield Underground at its ... ahem, core.

Both left Springfield to begin their professional careers – John went to Purdue to get a degree in Industrial Management and Engineering and worked in Virginia before joining the family business in Kansas City, while Christina got an accounting degree from Washington & Lee University and worked for a decade with PwC in the U.S. and the U.K. before taking the helm as CFO in 2016.

But when they spoke to The Network on August 15 in the latest installment of the CEO Series, they spoke of how lucky they felt to be in their current situations, and to be in Springfield.

“One incident sticks out,” John said of his time with his first employer, Vulcan Materials. “A really large piece of equipment was delivered, and the plant manager had no idea it was being delivered or what it was for. To me, that was telling about the big corporate environment and it made me realize that it wasn’t for me.”

While John says he always wanted to work with his father, Christina said she initially didn’t see herself as an accountant.

“When I was in high school, I heard a classmate say they wanted to be a CPA and thought that was the most soul-crushing thing ever,” she joked. “But it’s actually a great job. Being a small business, I get to wear a lot of hats – I’m also the chief marketing officer, sometimes I’m the chief legal officer and it makes the job really fascinating.”

The two both said that being in a family business also brings its own unique advantages – especially for the two of them. One reason: despite being in the third generation of family leadership, they avoid one of the classic potential hang-ups of family businesses – they’re cousins, not siblings.

“We grew up in different households and have different experiences, and for us, that’s a plus – we don’t have sibling rivalry like brothers and sisters might have,” Christina said, adding that one secret to their longevity has been the company’s ability to plan for continuity. “Governance work is hard work – professionalizing the company as it passes from generation to generation – and part of our success is our ability to do that.”

But despite the potential issues, including the difficulty of separating work and family life when your business is run by family, John said the downsides of their family business pale in comparison to the advantages.

“The love and support of your family is something I can’t stress enough,” he said. “We’re blessed with a family that respects each other.”