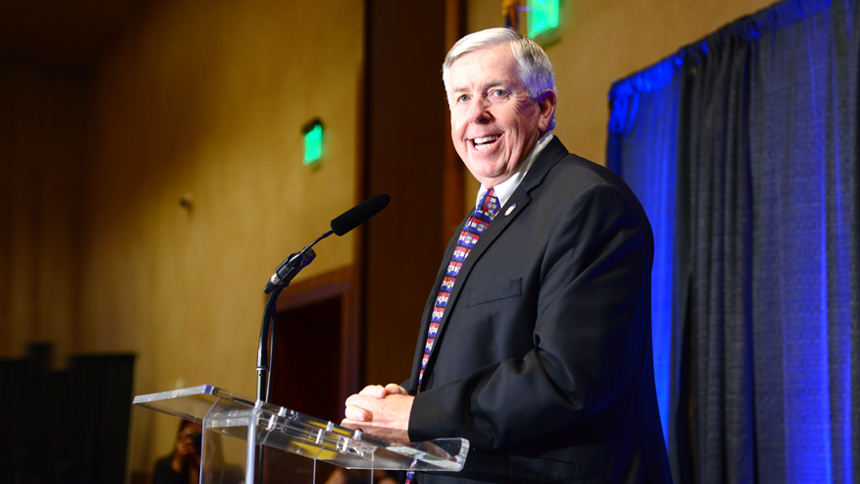 When he gave his first official State of the State address in the Missouri General Assembly in January, Governor Mike Parson laid out an aggressive but straight-forward agenda focused on two key areas: workforce development and transportation infrastructure.

When Gov. Parson visited Springfield July 31 to offer the keynote address at the Chamber’s second annual State of the State event, he touted unprecedented successes in those areas and others, achieved with the help of the state’s legislative and executive leaders, and looked to build on those achievements.

“Business and community leaders across the state have all expressed the same concerns: access to a skilled workforce and the need for strong infrastructure,” the governor told the sold-out crowd of more than 450 at White River Conference Center. “I appreciate the members of the House and the Senate for working with us on these priorities during this year’s legislative session; thanks to their leadership, we made historic progress on these issues.”

The cornerstone of the year’s workforce success was Senate Bill 68, which included creation of the Missouri One Start and Fast Track programs and passed during the last week of the legislative session, as did a $301 million bonding package to address more than 200 decaying bridges throughout the state; he noted that the state is on pace to invest more than $1 billion in new money on infrastructure over the next five years.

Parson also discussed one of his first actions as governor: reorganization of the state Department of Economic Development with the help of Director Rob Dixon. The department has been streamlined to be more efficient and responsive to business needs with fewer employees and less cost.

“When the state director of economic development comes into your office and says, ‘We’re not very good at what we do,’ that’s a bold statement to make to the boss,” Parson said. “But when we said that we were going to be more efficient in state government, we meant it.”

The governor also celebrated $10 million in increased core funding for Missouri State University and nearly $5 million for OTC’s Center for Advanced Manufacturing and Technology, as well as money for the Ozarks Regional Nursing Collaborative and full funding for the state’s K-12 foundation formula.

All of these workforce and infrastructure successes are part of the reason major businesses are making major investments in Missouri – from GM’s proposed $1 billion investment in Wentzville to Google’s $600 million data center in Kansas City, Bayer’s $164 million project in Creve Coeur bringing 500 high-paying jobs to the state, and NuCor’s $250 million steel manufacturing facility in Sedalia with its 250 new jobs.

Gov. Parson ended with a pledge to continue his focus on workforce, infrastructure and education – and to keep his outlook every day as a servant for the people of our state.

“Politics need to be pushed to the side and we need to focus on what’s good for Missouri citizens,” he said. “I tell people all the time, ‘You can take my title, but at the end of the day, I’m a public servant.’ Everyone else in the state legislature should be the same way. We should go to work every day thinking about how we can make things better for all of us.”

Thank you to the presenting sponsor for this year's event, Hartman & Company, Inc.