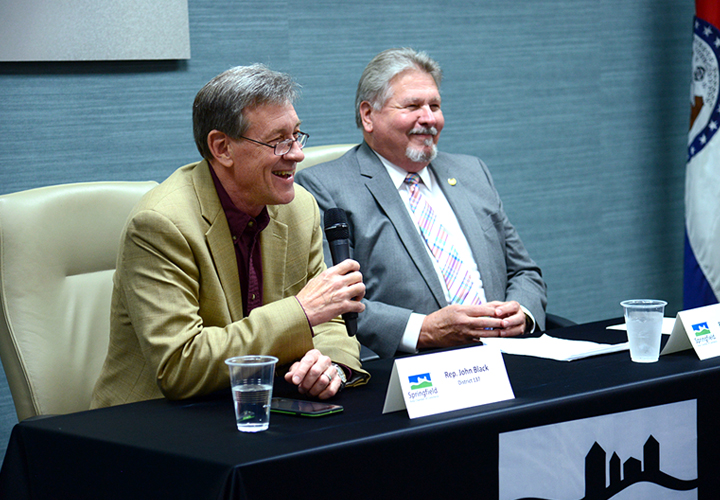 John Black and Craig Fishel each have decades of experience in the Springfield business community – Black as an attorney with both City Utilities and Missouri State University, Fishel as the owner of his own business for more than three decades.

But when the Missouri Legislature began its 2019 session, the two were among the newbies in the Capitol, part of the freshman class of legislators beginning their first year in office.

“We have an excellent freshmen class, from every background and profession. And there’s a lot of gray hair – people who have had to make payroll, work with other organizations to get things done, people with a lot of experience," Black said when the two visited the Chamber to speak to the Governmental Relations Committee on May 23.

Fishel, for example, was tasked with putting his business experience to work right away by serving on two committees addressing issues of high importance to Gov. Mike Parson: economic and workforce development.

Fishel said the Governor made it a point to attend a committee meeting early in session – a rarity for the state’s highest ranking official. But his presence in the meeting indicated the what a priority economic development was for Governor Parson.

Black, meanwhile, served on the one of the house’s most high-profile committees: the Budget Committee. He noted several successful efforts related to the budget this session, including increased funding for Missouri State University to improve its per-equity funding status compared to other state schools in Missouri, money for the OTC Center for Advanced Manufacturing, funding for the new Fast Track program, and once again fully funding the K-12 education Foundation Formula.

Even with those budget highlights, and successes this year in economic and workforce development, there are several other priorities that the freshman class would like to tackle in 2020.

“We’ve made several task forces that need to be focused on in our class,” said Black, who served on the budget committee among others. “One is public schools. How do we look at issues without saying ‘your ideas are bad’ and address issues that cause people to become disillusioned with schools? One is health and mental health. Another is infrastructure. We want to come back next year with some good ideas on how to solve some of these issues.”

And for Fishel, who had previous governmental experience as a member of Springfield City Council, joining the state legislature was a whole different ballgame. It’s one he’s already looking forward to getting back into next year with the local government caucus on which he serves, focused on maintaining strong connections between house members and local leaders.

“Sometimes there is a disconnect between some older reps and the local governments,” Fishel said. “We need to maintain those strong connections. To be the person that represents 37,000 people is an honor.”