Steve Edwards: Homegrown and giving back to Springfield 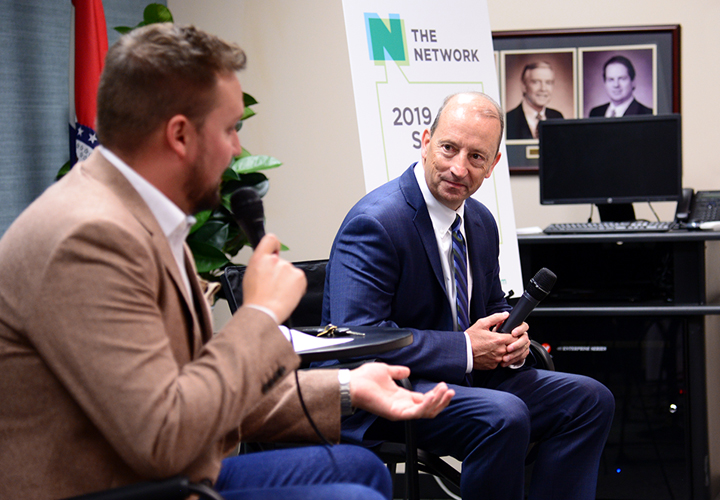 Steve Edwards was destined to be the CEO of CoxHealth.

As he told the young professionals who gathered on May 21 for the latest edition of The Network’s CEO Series, he was raised in Springfield – by a family of health care professionals, no less, including a father who served in the position – and even had his career planned out so thoroughly that he envisioned being offered the position at age 46 … which is exactly what happened.

Although to be fair, it wasn’t his first career choice. “My dream job originally was shortstop for the Royals,” he joked. “But I had mapped out a career plan at age 21 – I’m nerdy that way. And I was laser focused – I wanted to be CEO of CoxHealth. Plus, I could never hit a curveball, so that dream went away.”

That’s not to say that he was handed the job as leader of an organization with six hospitals, 85 clinics and more than 12,000 employees. After briefly working on the hospital grounds crew – and seeing the clinical work the numerous nurses in his family did every day – he decided he wanted to be involved in the business side of operations.

After obtaining degrees from Washington University and Baylor, he returned to Springfield with the goal of helping the health system he loved, and he eventually worked his way up through various leadership positions before being offered the role of CEO in early 2012. He’s now worked with CoxHealth for 27 years.

He offered plenty of advice and encouragement for the YPs in attendance – here are some highlights from his conversation with Network Chair Paden Wilcox.

What’s one lesson you’ve learned?
Patience. John Wooden said, “Move quick but don’t hurry.” My impatience would cause me to move too fast. In health care, everything is about speed – door-to-room time, operating room time – so I do want to drive speed. But we see 1.6 million patients in our clinics, so moving too fast could be really bad.

What’s your philosophy on leadership?
In health care specifically, I need to be a facilitator. There’s no way I can have all the answers, but I can find them. Jack Welch said that if you’re the smartest person in the room, you’re not very good at hiring people. It’s not about being the smartest. It’s about harnessing people toward a common vision.

What advice would you give yourself as a YP?
Work hard and be patient. I was talking to my son, and he said he feels like if he doesn’t get where he wants to go by the time that he’s 25, he’s a failure. I knew that where I lacked a specific talent, I could make up for it in work. I tell my kids every problem you have right now, you can work your way out of it. Have patience and know things take time.

What do you love most about Springfield?
Everything – Mexican Villa, Cashew Chicken, Andy’s, Bass Pro. If you drew a 10-mile radius around Springfield, almost everything and everyone I love is in that circle.