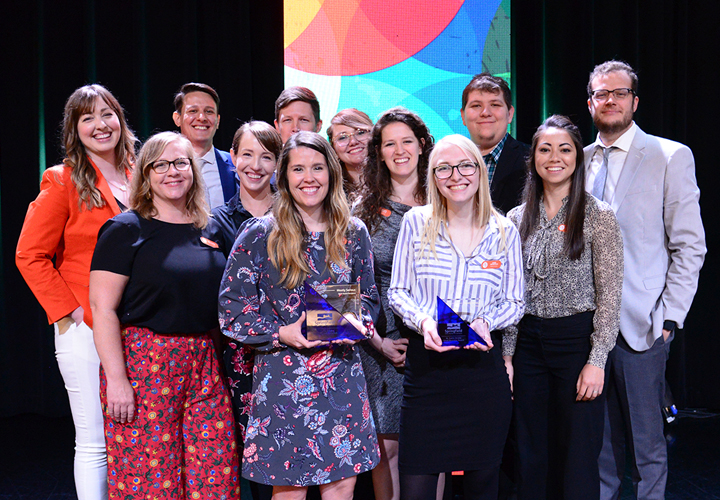 During its annual event on May 8, the Springfield Area Chamber of Commerce announced Mostly Serious as the recipient of the 2019 W. Curtis Strube Small Business Award.

More than 400 Chamber members were on hand at the Oasis Hotel & Convention Center for the luncheon event to hear about the five finalists: Air Services Heating and Cooling & All Service Plumbing; The Coffee Ethic; ESC, Inc. Consulting Engineers; Loehr Chiropractic & Acupuncture; and Mostly Serious.

Mostly Serious provides custom web design and development, along with digital marketing and brand strategy services. The company has grown to more than a dozen employees since its founding, and – citing a need for more room and a unique space – Mostly Serious moved to a renovated space in Galloway Village in October 2018 after nearly a decade of calling downtown Springfield home.

Jarad Johnson, president of Mostly Serious, said that he couldn’t have imagined his company being in this position when he co-founded it in 2010 from a small home office – and he gave the credit to both his dedicated team members and the clients who have supported the business along the way.

“We wouldn’t be the company we are without the amazing organizations we’ve had a chance to work with,” he said, “Whether it’s Community Foundation of the Ozarks, or CoxHealth, or Holloway America. They were our first client and they’re still with us today.”

The recipient was announced by Mel Eakins of 2018 honoree Great River Engineering. Eakins took a minute to reflect on what it has been like to hold the Small Business Award for the year, as well as the importance of the award process itself.

“Applying makes you take a step back and from your day-to-day business and reflect on things, and put it in a story,” he said. “This process allowed us to share our story as Great River Engineering – who we are, what we do, and what our purpose is. So if you’re a small business out there, I would encourage you to apply. You get much more out of it than you put in.”

The Small Business Award is named for Dr. W. Curtis Strube, late director of the Breech School of Business Administration at Drury University, who was a dedicated advocate of small business and founder of the Chamber’s Small Business Council.

This award, presented by the Chamber’s Small Business Council since 1992, celebrates the success of the organization’s small business members and recognizes the important role small businesses and entrepreneurs play in the local economy. More than 80 percent of Chamber members have 50 or fewer employees.