The Network takes on advocacy role at city, state level 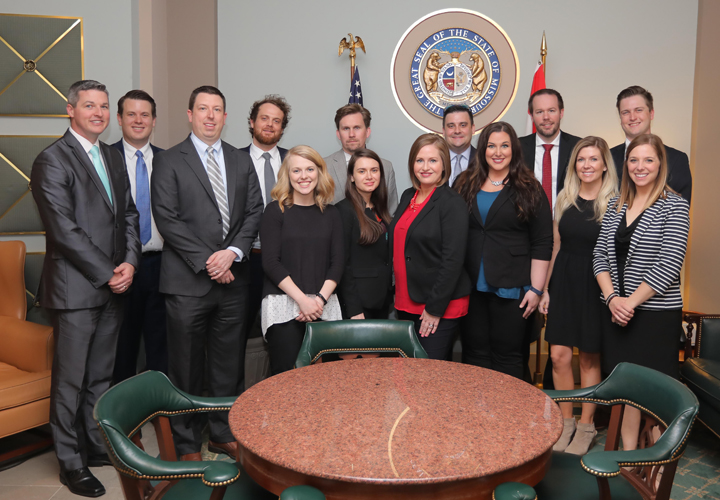 Springfield’s young professionals often tout their ability to be heard and have a seat at the table as one of our city’s biggest assets. They made that ability abundantly clear in two recent events – one here at the Chamber and one in the state Capitol.

On April 8, representatives of The Network’s 17-member Leadership Council met with city leaders to hear about Springfield priorities and the future of the city’s comprehensive planning process.

Mayor Ken McClure spoke about how the City Council worked to set its current set of priorities a couple of years ago: public safety, economic vitality, fiscal sustainability and enhanced legislative engagement. He said those priorities, which had not previously been updated since 1998, have proven successful thus far – including the 2017 renewal of the city’s level property tax to fund public safety improvements, as well as the renewal earlier this month of the 1/4-cent capital improvement sales tax for streets, sidewalks and stormwater improvements.

Mary Lilly Smith, the city’s director of planning and development, said the new comprehensive plan is long overdue. The last plan was created in the 1990s and created several projects including Jordan Valley Park, airport improvements, and updates in numerous neighborhoods throughout the city.

She said the city will soon announce the firm it is hiring for its new plan, at which point it will begin the public engagement process for the plan – including many opportunities for YPs and the rest of the community to get involved via social media and other avenues.

And City Manager Jason Gage offered his view of the city, having been in his role for roughly six months. Specifically, he called for more YPs to get involved on city committees, in volunteer roles and in other ways in the community.

“We have a dynamic economy and our community is resilient, but we need to show ourselves off better as a community,” he said. “We have a lot of people that care about our community and that want to make things happen.”

YPs also made their voice heard in Jefferson City, traveling to the Capitol on April 10 for The Network’s Advocacy Day. They met individually with legislators and state leaders to talk about the importance of education funding, infrastructure and workforce development.

The legislators offered a variety of viewpoints on the various issues. Some, for example, support Gov. Mike Parson’s proposal to issue bonds to jump start infrastructure work on bridges in the most urgent need of repair and replacement; others are against the idea, arguing that borrowing is not needed because there is general revenue money available that is not being utilized in the most efficient manner.

But while not everyone is agreement on the best method to tackle these issues, they all agreed that they were encouraged to hear from such a vocal and engaged group of young professionals.

The Network members on hand were equally enthused about their trip. “This day reinforced the depth of the resources that our young professionals bring to any situation,” said Ryan Sivill of BKD, LLP, who serves as The Network’s vice chair for 2019. “The impact of bringing together experts from the fields of law, finance, health care, education, government and small business was a testament to the engagement of our young professional community – and the collective influence we could have meeting with our legislative delegation.”