House Minority Leader calls for bipartisanship, willingness to work together 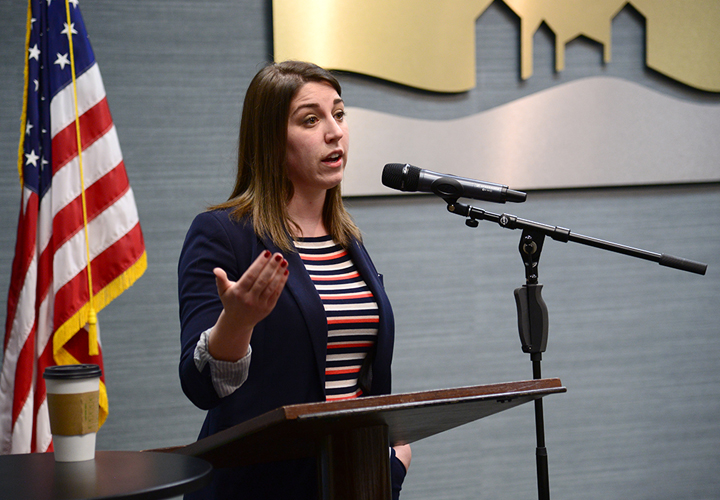 When she visited the Chamber on March 29 to offer a mid-session legislative update to the Chamber’s Governmental Relations Committee, Missouri House Minority Leader Crystal Quade offered an update on Chamber priorities as well as a straight-forward but troubling message: Partisanship has intensified in the Capitol this session.

The Democratic representative from Springfield offered the state budget process as an example of her concern. According to Rep. Quade, the House budget did not include any amendments recommended by Democratic members, marking the first time that has happened since 2003.

“Traditionally the budget has been the least partisan area of legislation,” she told the more than 60 business community members in attendance. “The budget committee served for hours on end, into the early hours of the morning some nights, and you can get a lot done working together. It’s important to pay attention to our history and how we function, or how we don’t.”

She said the budget is especially troubling given the fact that the state is currently facing a budget shortfall of over $250 million, and the budget for next year is based on growth of 1.7 percent.

Part of the challenge, according to Rep. Quade, is the unintended impact that term limits have had on the culture and process in Jefferson City. As a result, institutional knowledge is left to legislative staff and lobbyists, and the rise to committee leadership among lawmakers happens quickly, limiting their working knowledge and experiences that previously helped prepare lawmakers.

The minority leader shared that progress has been made on workforce development issues, including the Missouri Fast Track and One Start programs. Both have received bipartisan support and been listed as a top priority for Gov. Mike Parson, and both have passed the house – but progress has slowed in the Senate.

Quade expressed opposition to the expansion of charter schools, which has cleared its House committee, though it still awaits a vote by the full House.

“It siphons already-scarce money from our local public schools, and charter schools don’t have the same standards as public school districts,” said Quade, who noted that her children all attend Springfield Public Schools. “Anything that takes money away from our public school system is something I can’t support.”

Despite the uncertainty on many key issues, Quade said there is still time to get things done if everyone can come together. “The last 11 weeks of the session are when we crank into high gear,” she said, “and I’m just trying to make sure that everyone’s voice is heard and everyone has a seat at the table.”