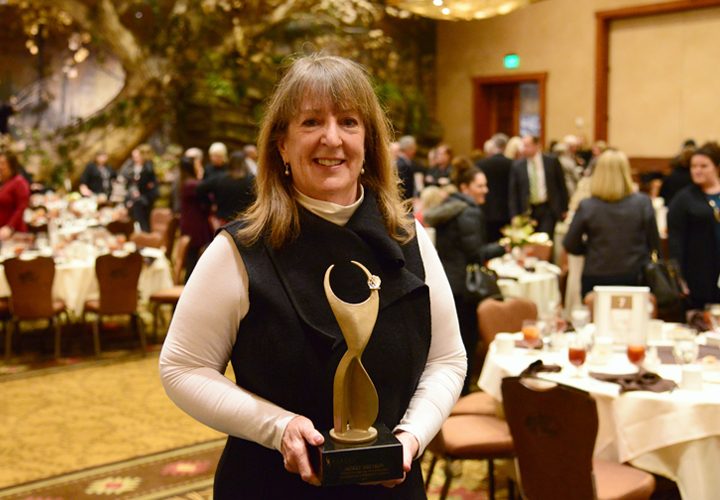 At our second annual ATHENA Award luncheon, the Chamber proudly recognized Morey Mechlin for her distinct leadership attributes – and those that make her an inspiration to other exceptional leaders in our community.

This year’s event welcomed more than 400 guests to White River Conference Center on March 6, who came to applaud and support the achievements of this year’s recipient. They also heard about the creation of a new award beginning in 2020, the Virginia Fry Rising Star Award, which will be given to a young professional. This emerging leader is acknowledged for making a positive difference by lighting a path and creating opportunities for women in the community.

The keynote speaker was Crista Hogan, executive director of the Springfield Metropolitan Bar Association. She noted that Mechlin resembles the goddess Athena, who was logical, strategic, and intelligent, prepared to fight the right battles. Athena fought her battles with strong inspiration, reliable support, and solid skills.

Hogan also spoke about how Fry was an inspiration. “Virginia was iconic of what a woman, lawyer, leader, mom, and wife could and should be,” she said. “I am so grateful that her inspiration will live on not just in those of us who loved her, but also because of the award that was established here today in her name.”

Following Crista’s speech, Springfield Mayor Pro Tem Jan Fisk presented the award to Morey in her capacity as the 2018 ATHENA recipient. She specifically emphasized Morey’s passion for civic engagement and enthusiasm to solve challenges. “In fact, one of the things I most admire about Morey is her willingness to tackle the toughest issues that head on,” Fisk said. “I can’t think of a major initiative in our community that doesn’t have Morey’s fingerprints all over it.”

Upon accepting the award, Morey was quick to thank her supporters and those who have motivated her. “I just want to encourage you all to express our inner goddess,” she said. “Every goddess is unique and has amazing experiences, knowledge, and energy to share.”

The event ended with a call for attendees to think about who they would nominate for next year’s awards. Because as Crista Hogan said, “We need more Virginias. We need more Moreys. We need more ATHENAs. We need you!”