Connecting with state leaders, both here and in the Capitol 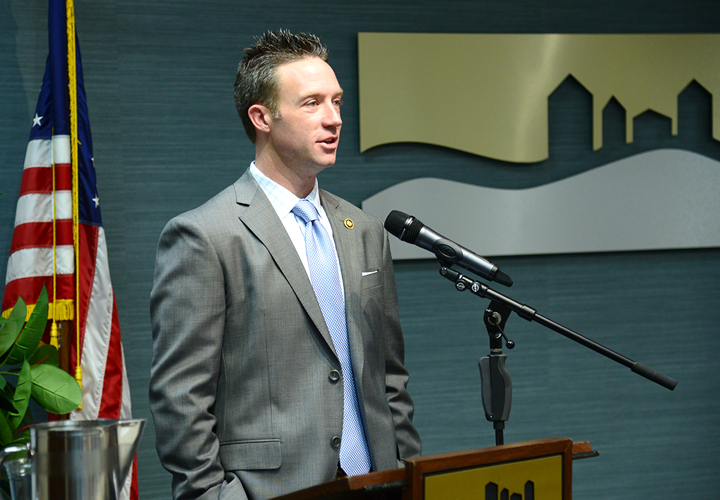 Many state leaders and elected officials tell us that they have truly come to rely on the Chamber for our advice and insight into the issues affecting businesses in this region. One of the main reasons those leaders turn to us is because we are consistent and diligent in voicing your priorities – and that diligence was on display throughout the month of February.

Cabinet members working together
One example: the February 22 edition of the Public Policy Speaker Series, featuring Director of Economic Development Rob Dixon and Commissioner of Higher Education Zora Mulligan. The two talked about how they are bringing their departments together to create workforce development plans that can be truly transformational for the state.

It started with the Best in the Midwest and Talent for Tomorrow initiatives, examining where Missouri ranked among its peers and neighbors in terms of economic and workforce development programs.

The result was an effort to completely restructure and streamline DED, moving sub-agencies to other departments better suited to manage them and improving overall process efficiency.

Director Dixon talked about this transformation for Missouri. It’s not one program or one idea, but an overall comprehensive strategy that addresses workforce and economic development in a way the state has never seen before.

This strategy does include specific programs. For individuals, it’s the Missouri Fast Track program, designed to help adults below certain income thresholds get the additional schooling or skills training they need to find better-paying jobs or advance in their current careers.

Mulligan noted that the most significant way to impact productivity and wages, is to provide individuals with better access to education and training.

“We’re able to change the lives of those people in our community who don’t have the resources to go back to school and get the training or certification they need,” Mulligan said. “We have a clear understanding that the path to prosperity is a better job.”

And for employers, there’s Missouri One Start – a centralized shop for customized training programs for businesses looking to relocate or expand to the Show-Me State. “It’s state government working better and smarter than it has before,” Dixon added. “It’s not things created out of thin air – it’s better use of what we already have. Missouri One Start will deliberately send a signal to global decision-makers that Missouri is ready to compete with the rest of the country.”

Both speakers called the current moment a turning point for the state – a chance to strike while everyone in state leadership is truly behind an issue. The Chamber has fully endorsed these proposals, as they are modeled off successful programs in other states and represent best practices that we have learned of during numerous Community Leadership Visits over the last several years. Addressing the workforce development challenges for Missouri employers is vital to their continued growth.

A visit from a senator
One person who sees the momentum firsthand is Senator Lincoln Hough. He’s two months into his first term as a state senator representing Greene County, and he offered an update on the current legislative session when he spoke to the Chamber’s Governmental Relations Committee on February 15.

One issue being discussed in the legislature is one of the Chamber’s top priorities: workforce development. He said he was encouraged to see the House, the Senate and Governor Parson all “pulling in the same direction” on the issue.

He said transportation funding is also a hot topic. While the failure of the fuel tax on the November ballot makes the situation more difficult, Hough said other options are now being discussed, including the governor’s bonding proposal.

“We’re having a very real conversation about how to do this without putting another tax increase in front of the people,” he said. “We know you can’t bond your way out of the infrastructure issue, but you can make strides.”

And funding for education is an issue as well; Hough said legislators are looking for ways to continue providing full funds for the state’s funding formula for K-12 education while also “wanting to do some good for higher education.”

It’s part of a tricky balancing act in a $29 billion state budget, one hampered slightly by revenue that is down from last year but improving.

Given Sen. Hough’s role as vice-chairman of the Senate Appropriations Committee, he is keenly focused on the state’s budget and current financial challenges. “The economy is supposed to be doing well and Missouri is not doing all that well. Our prediction of 2 percent growth is anemic,” he said. He elaborated on his measured and thoughtful approach to the state’s budget, strategic areas that need increased investment, and public policy in general.

“I don’t think you can give every dollar back to taxpayers when you get a new dollar brought in to the state,” he said. “Why are we working so hard to change these tax codes and laws if we never have any more funds to work with?”

Despite the challenges, Hough said he knows he can lean on the Chamber for support. “It gives me credibility with my peers by seeing you there in the Capitol every week,” he said of the Chamber’s staff and volunteer leaders. “It lets me say, ‘This is what my community has told me they want, and I know it is important to them.’”

During meetings with the Governor’s office, State Treasurer, Secretary of State, House and Senate Leadership, Departments of Economic Development and Higher Education and the Springfield local legislative delegation, the executive committee discussed Chamber priority issues from education and workforce development to infrastructure and business climate.

Check out our photo gallery page to see pictures of the day’s activities.