The importance of loving your community and creating quality places 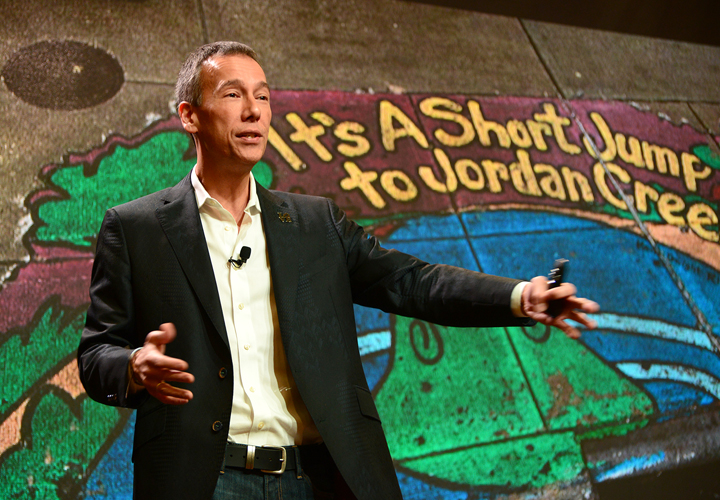 Living in a city is like being in a relationship, and like any other relationship, feelings about a city can go stale over time. To stay emotionally engaged, residents must celebrate their love for their city – and by doing so actually they actually make it a better place to live.

The value of loving cities formed the main message from the keynote speaker at the SBDC’s Annual Meeting: For the Love of Springfield. Nationally recognized author and community development consultant Peter Kageyama is known for spreading the message of impact of loving your city, and he brought that message to the 450 in attendance on February 21 at University Plaza.

“When it comes to their city, most people will ask for the most basic things, but at heart we know they want something more,” he said. “Why can’t our city be comfortable, convivial and interesting – or fun? Look for something beyond the merely technical sufficient solution – something to take Springfield to the next level.”

That effort to look beyond the traditional approach ties into the SBDC’s action plan. As the economic development arm of the Chamber, the SBDC has been refining its approach to job creation, recognizing that both current economic and workforce development efforts are largely driven by talent development and placemaking in communities across the country.

Ryan Mooney, the chamber’s senior vice president of economic development, summarized the SBDC’s project activity success for 2018 (click here to view the SBDC 2018 Annual Report, which was distributed at the event) and presented context for this evolving approach – mainly the continued shortage of skilled workers and the increasingly fierce competition with other cities for those valued people.

Mooney noted that there are more job openings nationally than people to fill them, a first in modern U.S. history. Part of solving that problem will be skills training – workers will need the ability to retrain, possibly multiple times during their careers.

But the ability to grow as a community is also vital, and help is not coming from the next generation, as millennial workers are already in the workforce and coming generations do not have the numbers to replace the retiring baby boomers.

The growth will have to come by drawing people from other areas, and the key to that effort is placemaking. That’s where Kageyama’s message comes in: loving our city means making the community a more inviting place to live, both for current residents and those considering relocation.

While we certainly have to invest in assets for our community, all the ideas for improvement don’t have to be expensive, he said. Some of the most modest touches can demonstrate people’s love for the community. He pointed to numerous examples around Springfield, from downtown’s painted storm drains to the “yarn bombs” in the Rountree neighborhood to citizen-led efforts to create a new city flag.

“The problem lies when we think the only solution is in huge programs like bridges and construction projects,” Kageyama said. “How good would it be if more of our fellow citizens rolled up our sleeves and got involved in the game? This is a great time to remind each other that we’re all in this together. Look at the resources we have here, look at each other, and say, ‘Hey, I love this place.’”