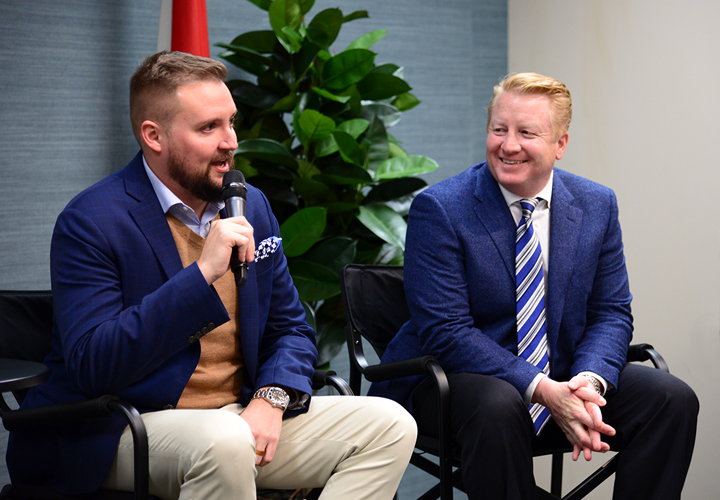 The Network kicked off 2019 by introducing roughly 100 of its members to their chairman for the new year, as well as the chairman of the Chamber’s Board of Directors.

The “New Year, New Leaders” event on January 10 at the Chamber gave Network members a chance to hear from Network Committee Chair Paden Wilcox of Computer Recycling Center and Chamber Board Chairman Jeff Childs of SVN/Rankin Co. The two leaders offered their thoughts on a wide range of questions. Here’s just some of what they had to say:

What’s one key turning point from your career so far?
Jeff: Early in my career, I had put together a deal that I thought was sold, a done deal … until I got the termination letter. I was really upset. We were living off my wife’s teaching salary. But we made the decision to put our faith in God. It gave me the ability to turn down projects I didn’t believe in, even if they could have made me money. When you have that ability, it’s amazing how much more success you can have – because you have the high ground.

Paden: I walked into my first Business After Hours, and I knew nobody. I had no idea what to do. I immediately walked out and left. I had to decide to go back, because I realized that when I’m uncomfortable is when I’m growing. I realized I have to seek out opportunities to be uncomfortable because it helps me grow.

What’s your vision for your respective organizations?
Paden: The Network has huge momentum. And next year is going to shape where we go over the next 20 years. It’s about having boots on the ground and being involved. Talent attraction and retention remains essential. I want business leaders to come to us and tell us your issues – why do people leave? How can we help make the community more sticky for YPs?

Jeff: It’s the Chamber’s 100th anniversary this year. It’s hard to believe that something is still viable after 100 years, but we are. So what we’re trying to do is take a quick look back and then put all of our emphasis forward. It’s much more fun to look at what’s on the horizon.

What advice do you have for others to be successful this year?
Jeff: Get out and get next to the person you’re doing business with. Get comfortable face to face, and it will set you apart from a lot of other people. I want to encourage you to take that action step this year – do something you haven’t done, get outside your comfort zone, volunteer, and take some sort of action that doesn’t involve social media. Get involved personally.

Paden: I love the access – as a 30-year-old, I can sit on the Chamber board. You’re respected and treated as an equal. Leaders will take the time to talk with you, listen to your needs, tell you what they’ve done wrong. Having a seat at the table is very meaningful, and no one here should take that lightly. If you’re not taking advantage of that opportunity here, shame on you.