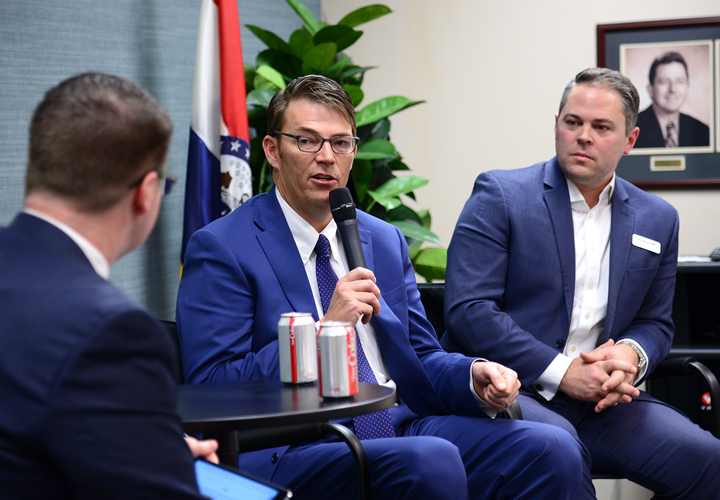 On November 28, two Speakers of the Missouri House of Representatives – one past, one present – visited the Chamber for the last installment of the 2018 Public Policy Speaker Series.

Todd Richardson, speaker from 2015 through the end of the recent session, is now the Director of Missouri Healthnet, the state’s Medicaid program. He was joined by Elijah Haahr, who recently became the first elected House Speaker from Greene County. They spoke to a packed room of community and business leaders about their proudest accomplishments, as well as what the future might hold.

Richardson said he is most proud of the fact that the legislature remained focused in 2018 on making Missouri competitive for business growth.

“We sit in the middle of the country, we have relatively low-cost power supply, and a robust network of rails, rivers and roads,” he said. “So if we can make public policy improvements to encourage businesses to relocate here or to grow here, we will do nothing but grow. We should accept nothing less than being the top economic environment in the country.”

He added that the Springfield Chamber has been instrumental in helping those efforts. “Your work has been crucial to helping us shape a legislative agenda that encourages businesses to grow,” Richardson said.

Chamber President Matt Morrow, who was moderating the discussion, noted that the leadership of Richardson and Haahr is part of the reason the state’s economy is poised for continued growth in coming years. Part of encouraging that growth will be in the area of workforce development, where Speaker Haahr said leaders from both parties are in agreement that focus is crucial.

“Missouri’s unemployment rate is 3%, but our poverty rate is almost 20%. It means people have jobs, but they need better-paying jobs,” he said. “You’ll see in the first few weeks of session a big push on workforce development, and I think local groups like OTC will be at the forefront over the next couple of years.”

Haahr said the “lion’s share” of the remainder of the year likely will be spent on budget issues, figuring out how best to allocate money among the state’s largest expenditures – health care, K-12 and higher education, transportation and other priorities. It’s part of the reason he noted that he is not pushing for additional tax reform following the corporate tax cuts approved in 2018, saying he doesn’t think there is much to be gained from lowering taxes further.

Balancing all of the necessary budget items successfully will require working with others in the legislature to build consensus. It’s a quality Haahr said he admires in his predecessor as speaker.

“In the past, speakers have been very autocratic. Todd has always taken a much more community-oriented approach,” he said. “Through the last week of his last session, he could still go out and find five votes if he needed five votes. He could build consensus and it made him a much more effective leader.”

Haahr also noted that Richardson remained as well-respected in the Capitol upon leaving the speaker’s chair as he was when he entered it. It’s a claim, Haahr said, that few recent speakers can make – and it’s due to the outgoing speaker’s willingness to work with his colleagues.

That approach will be needed in Richardson’s new job as well, managing the $11 billion Missouri Medicaid program. It’s a monumental task – the program takes up more than a third of the state’s total budget – but Richardson said it’s essential to keep the program from growing out of control.

“Missouri’s reimbursements today are based on calculations done in 1995. That tells you how long we’ve been stuck with the same basic policies,” he said. “My vision would be for Missouri to improve outcomes but also improve costs in a way that doesn’t consume the entire state budget. We will never have enough money to fund our other priorities if we don’t get health care costs under control.”